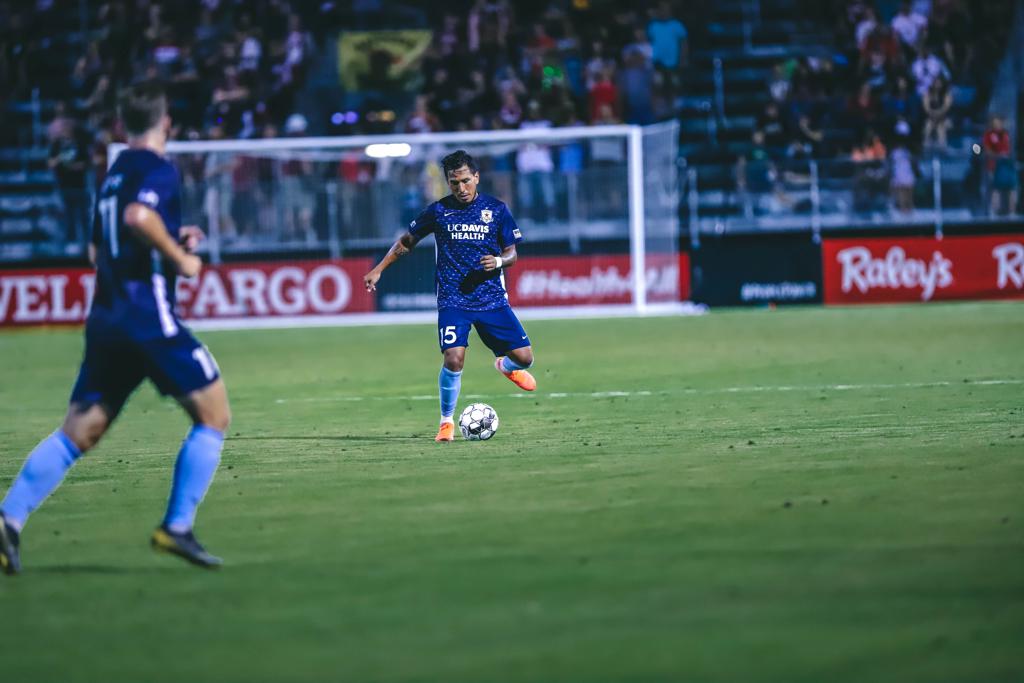 Republic FC will be wearing their "City Kits" against Las Vegas Lights FC on Wednesday night.

Republic FC (9-9-3, 30 pts) rediscovered their winning form over the weekend with a first-ever win in San Antonio. The boys in Old Glory Red took a commanding 3-0 lead in the first half before the hosts crept back with two second half scores, but they ultimately held on for a crucial 3-2 road win.

Stefano Bonomo, whose Saturday evening efforts against San Antonio FC earned him his second USL Team of the Week honors of the season, opened the scoring in the 21st minute after heading home a Sam Werner corner at the far post. Cameron Iwasa lifted his goal tally on the year up to 10 in the 33rd minute when the Sacramento-native connected on a Drew Skundrich cross and powered a header past the San Antonio goalkeeper. It was the second consecutive season he’s hit double digits and the third time he’s done so during his SRFC career. On the cusp of halftime, Bonomo bagged his second brace of the season when the former New York Red Bulls forward tapped in a perfectly placed Juan Barahona cross.

Three goals against the Texan club secured all three points and elevated Republic FC firmly back into the playoff picture with 30 points from 21 matches and into seventh place in the Western Conference based on a superior goal differential.

Las Vegas Lights FC (7-9-5, 26 pts) are a tough team to beat at home, but on the road is a completely different story. The Nevadan side have just a single win away from home all season and have lost their last two straight road matches. Out of 10 away games this year, Lights FC experienced defeat in eight and have been outscored 26-8, the most recent being a 2-1 loss on Saturday night to Fresno FC where a red card forced Las Vegas to play the entire second half a man down.

Despite finding limited success away from Cashman Field this season, Vegas does do a decent job of creating offensive opportunities. Lights FC are fourth in the Western Conference with 316 shots and leading the charge is forward Irvin Parra. His 61 shots are second-best in the entire USL and the Sin City striker currently leads his side in goals (10) and assists (4). Parra has recorded all his scores from inside the box, but his chances may be few and far between against a Republic FC defense that’s currently fourth-best in the Western Conference.

Fans may recognize a few familiar faces including Lights FC’s head coach Eric Wynalda, a former U.S. Men’s National Team player and FS1 soccer analyst, currently in his first season at the helm. One of Wynalda’s attacking options to call on is former Republic FC striker, Sammy Ochoa, who during his singular season with Sacramento in 2017 led the team in both goals and assists. Goalkeeper Thomas Olsen, who has started every league match for Sin City this season and is tied for third in the Western Conference with seven clean sheets, also spent time in the California capital during a brief loan spell with Republic FC at the end of last season.

The Indomitable Club has never lost at home to Las Vegas and better yet, has yet to concede a goal to the Nevadan club on this side of the California state line. The last time these two clashed was an early May six-goal Sin City slugfest that saw the boys in Old Glory Red snag a 1-0 second half lead before Lights FC erupted for four straight scores and eventually won the match 4-2.

Wednesday’s rematch will feature a unique matchup when brothers Jose and Jaime Villarreal square off against each other for the first time in their professional career. The Villarreal brothers, who both played for and alongside one another with LA Galaxy (four times) and LA Galaxy II (28 times), were the ninth pair of brothers to line up alongside one another at the MLS level.

Wednesday’s match will be broadcast live on KQCA My58, Estrella TV Sacramento (Spanish) and nationally televised on ESPNews. Updates online will also be provided via Twitter at @SacRepublicFC or by following #SACvLV. To see more matchday information, visit SacRepublicFC.com/matchday-guide