The Indomitable Club’s pursuit of Championship Cup glory continues in the Lone Star State this Saturday night. Kickoff for the Semifinal showdown is set for 6:30 p.m. PT. 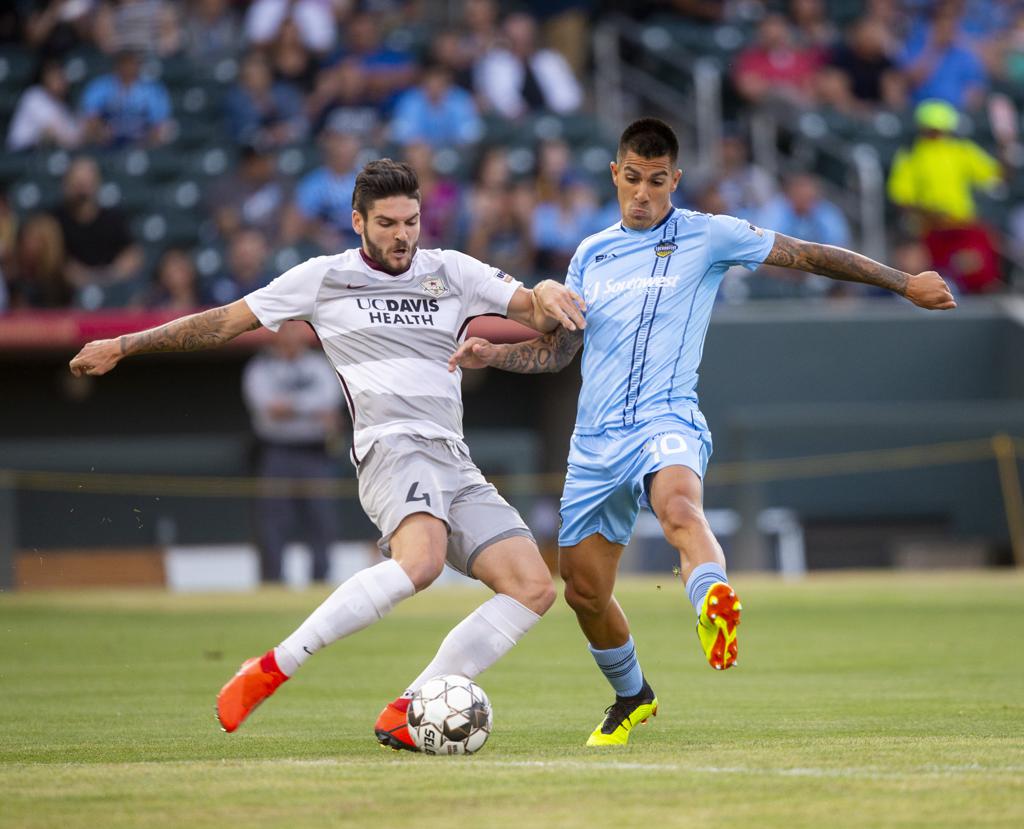 Mitchell Taintor and the Republic FC defense allowed the third-fewest goals in the Western Conference this season with 45.

No. 7 seed Republic FC (14-14-6, 48 pts) heads into a Western Conference Semifinal clash this Saturday night at Southwest University Park against an El Paso Locomotive FC side that swept the regular season series over Sacramento.

However, no team has ever beaten the Indomitable Club three times during the same campaign.

In 2017, Republic FC were in a similar postseason situation against a Real Monarchs team that had triumphed over SRFC twice during the regular season (both 2-0 results). When the two sides collided in the playoffs, Sacramento had the last laugh and advanced on penalty kicks.

Simon Elliott’s men are currently fresh off a 3-1 come-from-behind victory over No. 2 seed Reno 1868 FC last Saturday night. The upset road win over their regional rivals was the second time in the same week that the resilient boys in Old Glory Red battled back from an early goal down to march on in the 2019 USL Championship Playoffs. Last Wednesday night, SRFC advanced through the play-in round following a 2-1 win at Papa Murphy’s Park over New Mexico United where a stunning Thomas Enevoldsen volley in the 82nd minute ultimately proved to be the difference.

Against Reno, the hosts jumped out to an early lead in the first minute through Devon Sandoval but winger Sam Werner answered back just three minutes later. Forward Cameron Iwasa found defender Juan Barahona down the left flank who fired a low cross that Werner slammed into the roof of the net.

The Indomitable Club bagged the eventual game-winner in the 70th minute through the club captain. Winger Villyan Bijev spotted the club’s all-time leading goalscorer in space and delivered a perfectly weighted ball to the Sacramento native who calmly picked his spot and delivered the punishing blow. The goal was Iwasa’s 17th this season.

Enevoldsen put the game out of reach just five minutes later when the Danish striker rifled a close range shot by the 1868 FC goalkeeper for his 10th goal with Sacramento since joining the club in August. Over the last 14 games, Iwasa and Enevoldsen have combined for 17 goals and seven assists and of those 14 matches, only four times has the dynamic duo not found the back of the net.

No. 6 seed El Paso Locomotive FC (13-10-11, 50 pts) are fresh off their inaugural USL Championship campaign and solidified a postseason spot in their first-ever season, just like Republic FC did back in 2014.

Saturday will be the first-ever home playoff game for the club from the Lone Star State. Over the weekend, Locomotive FC upset No. 3 seed Fresno FC, 3-2, after having to battle back from a goal down. Josue Gomez gifted El Paso a 1-0 lead before Fresno fired back with second half strikes from Christian Chaney and Alex Cooper. Former Republic FC defender James Kiffe leveled the match in the 77th minute before Sebastian Velasquez’s conversion from the penalty spot sealed Locomotive FC’s place in the Semifinals.

Three goals for El Paso against Fresno was pretty rare, given the Texan team scored three goals or more in a match just five times all season. On the year, Locomotive FC netted the fifth-fewest goals in the Western Conference this season with 45. Forward Jerome Kiesewetter led the team in goals this season with 12.

Defensively, El Paso is one of the best in the west. Locomotive FC allowed the second-fewest goals in the conference with 38 and kept the second-most clean sheets in the West with 13.

The Indomitable Club is winless in the all-time series against El Paso. These two clubs have only clashed twice before, with Locomotive FC earning all three points from both matches.

The first meeting between the two clubs was a 3-1 win for El Paso in Texas back in mid-May. Calvin Rezende put the hosts in front in the 10th minute before Drew Skundrich leveled the match in the 35th. Kiesewetter’s second half brace ultimately put the game out of reach.

When the two teams met again in late-September, a driving rain storm caused a lengthy weather delay. Thomas Enevoldsen put SRFC out in front before Bryam Rebellon equalized in the 48th minute. But a Josue Gomez strike deep into extra time lifted Locomotive FC to victory.

Former Republic FC defender James Kiffe is the current left back for El Paso Locomotive FC. Kiffe, who played with the Indomitable Club from 2014 to 2017, was a member of the Championship-winning side and is currently third all-time in club appearances (89) and starts (85).

Saturday’s match will be broadcast live on KQCA My58, Estrella TV Sacramento (Spanish) and ESPN+. Updates online will also be provided via Twitter at @SacRepublicFC or by following #ELPvSAC. To see more matchday information, visit SacRepublicFC.com/matchday-guide