The eight-month season features 34 regular season matchups -- 17 in Sacramento -- beginning in early March and concluding on Saturday, October 17 at home against last season’s USL Championship Supporters’ Shield winners, Phoenix Rising FC. The Indomitable Club will be featured during the USL Championship Game of the Week on ESPN Deportes on Wednesday, Sept. 9 when it hosts Colorado Springs Switchbacks FC.

Later that month, the boys in Old Glory Red will get their chance for revenge against El Paso Locomotive FC on May 30, the club that brought SRFC’s 2019 playoff push to an unfortunate end in the Semifinals. Another former USMNT star will see his side visit the California capital on September 19 when Head Coach Eric Wynalda’s Las Vegas Lights FC come to town for a Saturday night showdown.

The boys in Old Glory Red finish with three massive matches over the last two weeks of the regular season. On Sunday, October 4, Republic FC hosts 2019 USL Cup Champions Real Monarchs SLC before traveling to Reno the following Saturday and then ending the season at home against Phoenix.

Republic FC fans can secure their spots for the 2020 season by selecting a full or partial-season plan today – starting at just 5 matches and under $20 per match, or by hosting a group outing of 10+ guests. All members will receive the full slate of Republic FC membership benefits, as well as priority access for the inaugural MLS season in 2022. Membership and group ticket information is available at SacRepublicFC.com/tickets or by contacting a member services representative at (916) 307-6100.

New for 2020:The 18-team Western Conference welcomes USL rookies San Diego Loyal SC to the championship chase for its inaugural season. Miami FC will open play this year as part of the 17-team Eastern Conference.

Games by Day of the Week 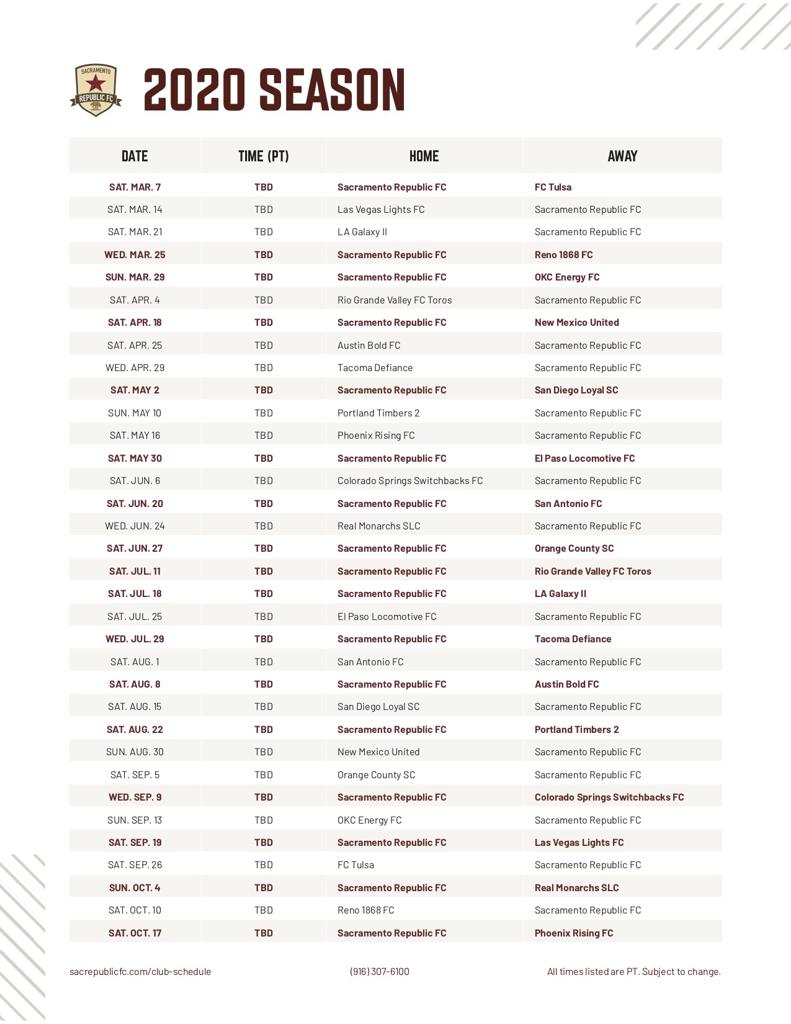