Sacramento, Calif. – Sports Business Journal announced that Sacramento Republic FC President and Chief Operating Officer Ben Gumpert has been selected as a member of its annual and nationally-recognized 40 Under 40 list, spotlighting top leaders in the sports industry. The native Sacramentan’s career has spanned across the country with leading firms in business and sports. In 2013, he returned to Sacramento and ­­­has left an indelible mark on his hometown through projects that have redefined the city. 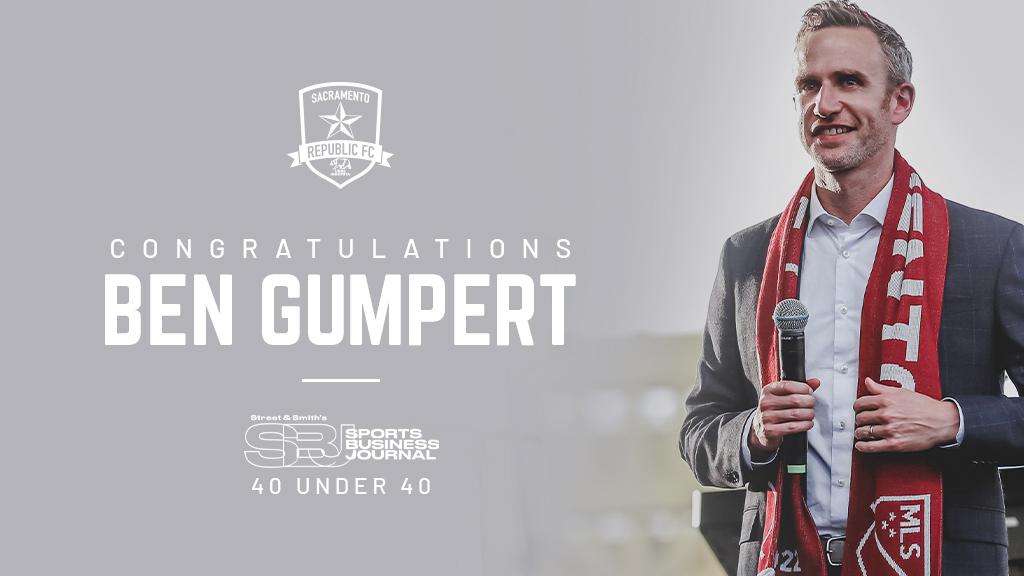 “Ben’s accomplishments in the sports industry, especially his achievements in Sacramento, are well-deserving of such a prestigious honor,” said Republic FC investor Matt Alvarez. “His relentless pursuit and work to bring MLS to Sacramento is only a small sample of what he is capable of and Republic FC’s future is very bright because of his hard work.”

“We’re very fortunate to have an accomplished leader like Ben in our community,” said Republic FC Investor Kevin Nagle. “He has led the charge to create a club intent on making our region an incredible place to live, and ready to compete at the highest levels of soccer. Congratulations on this outstanding recognition, Ben.”

Since 1999, the Sports Business Journal 40 Under 40 list has become one of the pre-eminent standards of industry recognition across the country. In the last 20 years, over 600 individuals from more than 300 companies have been recognized. Beyond just sports teams, Sports Business Journal looks to spotlight emerging leaders who exemplify leadership, achievement, innovation, risk-taking and collaboration — complemented by a spirit of humanity and philanthropy in their communities.

“I am blown away by this honor. I have been incredibly fortunate to work under and alongside some of the absolute best in the business,” said Republic FC President and COO Ben Gumpert. “Their leadership, friendship, and mentorship have helped me every step of the way. This is a tribute to them and I will continue to work every day to make them proud.”

Since 2017, Ben stewarded Republic FC’s ultimately successful efforts to become an MLS expansion club, working with civic and corporate leaders, investors and fans. During his tenure as President and Chief Operating Officer, the club has consistently been at the top of all league metrics - attendance, ticket sales, sponsorship, and merchandise.

“We are so fortunate that Ben Gumpert came home to Sacramento to put his impressive drive, passion and analytical skill to work building two great sports teams, a new basketball arena, and now a new stadium for Major League Soccer,“ said Mayor Darrell Steinberg. “His list of accomplishments would be impressive at any age, and is remarkable given that he is under 40. Congratulations to Ben on the well-deserved recognition.”

Ben’s career spans three of North America’s premier sports leagues and creating two world-class venues – with a third to open in 2022. In addition to navigating MLS expansion in Sacramento, Ben served as the Sacramento Kings’ Chief Marketing Officer until 2016 – as the club created the transformative, and award-winning Golden 1 Center. Before returning to his hometown, Ben spent five years at the National Basketball Association’s Team Marketing & Business Operations, including leading the strategy & analytics group driving some of the league’s most innovative projects and developments. His sports career launched with a tour at the San Francisco Giants in 2006, while at Stanford Business School, where he worked with team executives examining data trends and supporting business development, including implementing predictive modeling that is used throughout the industry today. Ben began his career at Bain & Company, a leading management consultancy.

He is a Rio Americano High School graduate, where he was valedictorian, and currently resides in Sacramento with his wife, and two daughters, Zoe and Amelia.