SACRAMENTO, Calif.  — Yesterday, U.S. Soccer announced the Second Round matchups for the 2019 Lamar Hunt U.S. Open Cup. Sacramento Republic FC will host Oakland Roots on April 8 at 7:30 p.m. PT. at Papa Murphy’s Park. This match is included in the ticket package of the club’s Indomitable Members and will be automatically added on their account. 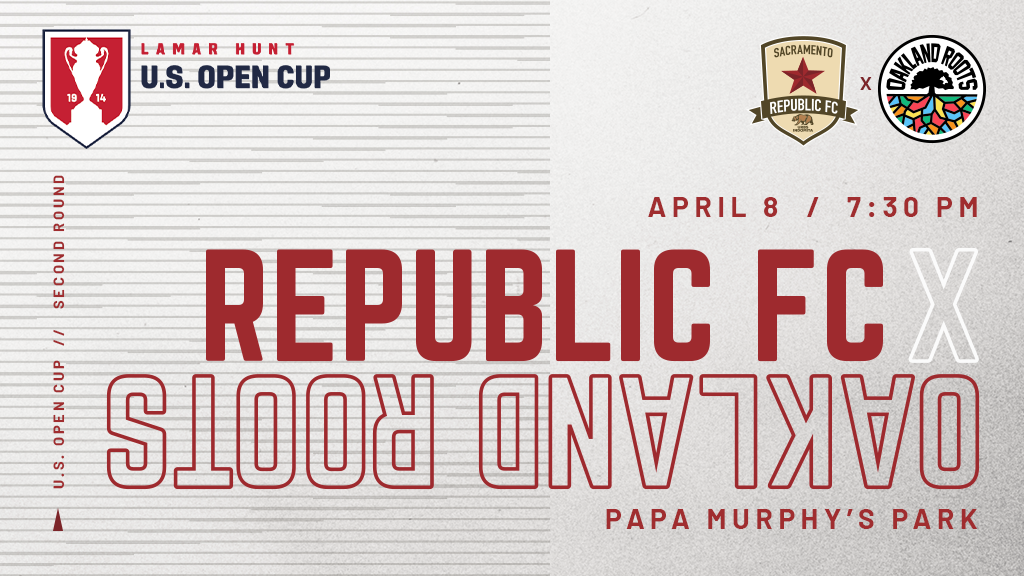 Full, half and partial season memberships – starting at 5 games – are currently available and all plan holders will receive club benefits, including priority access for the team’s inaugural MLS season in 2022. Visit SacRepublicFC.com/memberships to learn more. Single-game tickets for U.S. Open Cup and 2020 USL Championship season matches will be available at a later date.  Fans who join the club's list at SacRepublicFC.com/join-mailing-list will have first access to upcoming match tickets.

Last season, Republic FC advanced to the Fourth Round of the tournament, but fell to MLS-side San Jose Earthquakes, 4-3. In previous years, Republic FC reached the Round of 16 – the club’s best showing – by defeating Fourth Round opponents, MLS sides Real Salt Lake (2017) and Seattle Sounders FC (2018.) Both years, the club’s tournament run was ended with away matches at the hands of Los Angeles’ MLS clubs – LA Galaxy in 2017 and LAFC in 2018.

Last year, Oakland Roots kicked off its inaugural season in the National Independent Soccer Association, the third division of professional soccer in the United States. The club finished the fall season with a 0-3-3 record.

Founded in 1914 and entering its 107th year, the Lamar Hunt U.S. Open Cup – U.S. Soccer’s National Championship – is the oldest ongoing domestic soccer competition in the U.S. and the third-longest continuously running open soccer tournament in the world. The single-game, knockout tournament is open to all professional and amateur teams affiliated with U.S. Soccer. The winner of the 2020 U.S. Open Cup will receive $300,000 in prize money, a berth in the 2021 Concacaf Champions League and have its name engraved on one of the oldest nationally-contested trophies in American sports. The full schedule and more information are available on the U.S. Open cup website.