Sacramento, Calif. – Sacramento Republic FC Midfielder Andrew Wheeler-Omiunu will share his passion for music on this week’s episode of “MLS Idle: Soccer’s Hidden Talents” this Thursday at 4:30 pm PT on Twitter and Facebook. Fans can vote for Wheeler-Omiunu by posting #MLSIdle and “Wheeler-Omiunu” on Twitter or Facebook from the conclusion of his appearance on the show until Sunday at 11:59 pm ET.

“Music has been a constant in my life, and I found it to be a huge source of peace and tranquility for me,” said Andrew Wheeler-Omiunu. “Especially during this unique time for soccer fans in Sacramento and around the world, I’m humbled to join the show and offer a song to lift fan spirits.”

“Our team is much more than top soccer players; they are well-rounded individuals with impressive talents,” said Republic FC President and Chief Operating Officer Ben Gumpert. “Republic FC fans have rallied around Andrew’s musical gift during this difficult time, and we are excited that he is sharing his voice with the soccer world.”

Andrew first shared his musical talents with Republic FC fans when he performed Coldplay’s Yellow for an edition of the Tiny Apartment Concert video series. His passion for music formed at an early age, listening to his parents sing in the car and learning the words to every song on his first mp3 player. While at Harvard, Andrew joined one of the university’s a capellagroups and was able to work with talented fellow students and perform in front of classmates.

MLS Host Susannah Collins, former player and MLS Soccer Analyst Charlie Davies and special guest Bobby Boswell will judge the hidden talents of MLS players. Fans will have the opportunity to vote for their favorite performances and select each episode’s winner.

In the inaugural episode of MLS Idle: Soccer’s Hidden Talents, Rolf Feltscher of the LA Galaxy, NYCFC’s Ronald Matarrita, Inter Miami CF’s Lee Nguyen and Keegan Rosenberry of the Colorado Rapids competed against each other with Rob Stone of FOX Sports joining as the special guest. 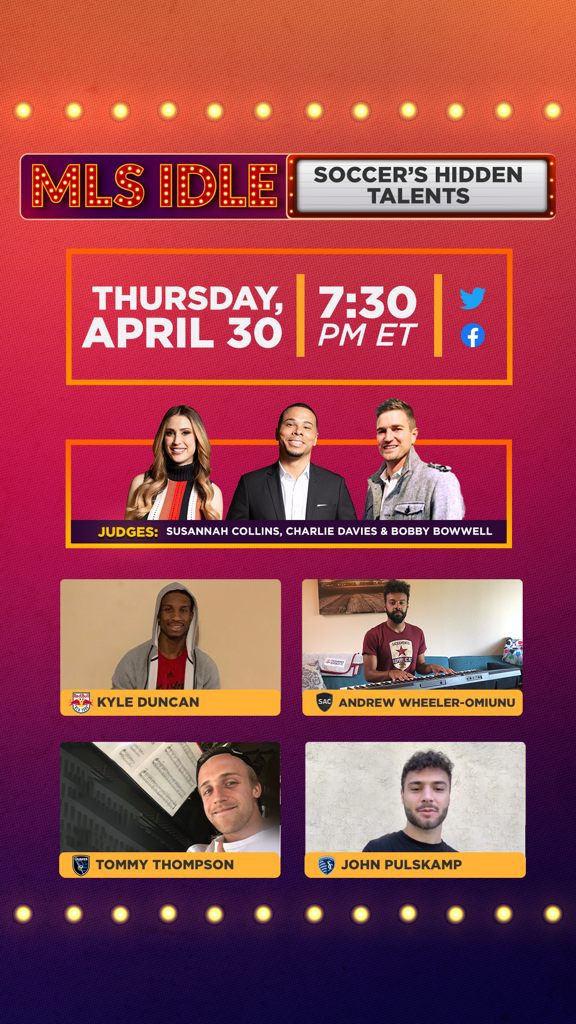 As a part of “MLS Idle: Soccer’s Hidden Talents,” MLS WORKS will make a $1,000 donation in honor of each weekly winner to a local charity designated by his club. If Andrew wins the #MLS Idle Week 2 fan vote, Sacramento non-profit Department of Sound will receive a donation to grow programming that helps middle- and high-school students learn the fundamentals of music production and begin creating original music by utilizing open-source, browser-based, free software. Currently, Department of Sound is shifting its programming to support distance and online learning for students during school closures due to the pandemic.