The Indomitable Club claimed a respectable 10th Place following completion of its first-ever stint into eSports after a successful run during the USL eCup FIFA20 Edition while representing the Mexican National Team.

Guided by Republic FC players Rafael Diaz, Juan Barahona and Ashkanov Apollon – alongside Justin Sterk who was the winner of the inaugural SRFCxFIFA20 Tournament – El Tri bounced back and forth between the top two divisions and continued to look more and more impressive as the tournament moved along and finished the competition with 375 points – tied with El Paso Locomotive FC’s Argentina.

After the initial draw to determine which club competed with which national team, the boys in Old Glory Red were handed Mexico and an opening round fixture against Memphis 901 FC – competing as Austria. A Diaz-led Mexican-side seized a 3-1 win over Austria before Apollon and El Tri fell 4-1 to OKC Energy FC’s Portuguese powerhouse. 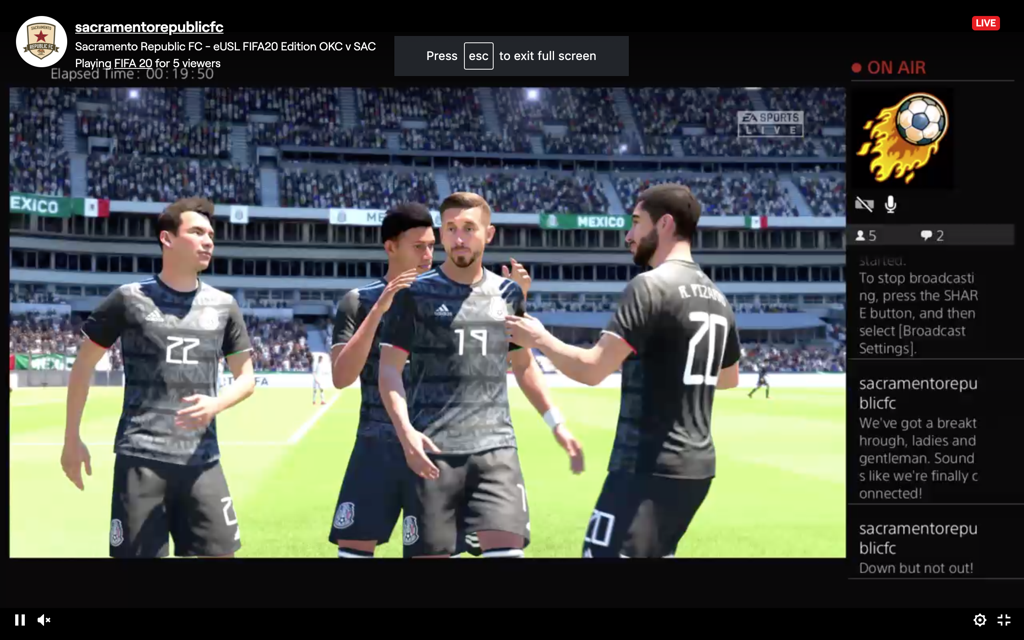 The result meant SRFC would miss out on Division A for the first week of the divisional contests and promotion to the top tier would be the week-long pursuit. But the boys in Old Glory Red were focused and found a 3-1 win over Tampa Bay Rowdies – representing Colombia – in the Division B Quarterfinals. The following day, a brilliant Barahona lifted El Tri to a 3-2 Semifinal victory over Charleston Battery’s Greece-side and set up a second division championship clash with New England Revolution II’s Russian-squad.

Mexico was unable to overcome Russia in the final, 4-1, as professional EA Sports FIFA player for New England Revolution – John Oliveira – was simply too much to handle and proved his professional gaming worth. However, a runner-up finish in Division B solidified a spot in the top tier for SRFC the following week and granted the Indomitable Club 375 points in the overall standings.

For the first time in the competition, Republic FC was in the topflight. But the Indomitable Club got a quick taste of what it’s like to compete with the best as Omaha Union – playing as Norway – downed Mexico 3-0 and sent the boys in Old Glory Red back to Division B.

Again, Sacramento was primed for nothing short of promotion and the team was now determined for a swift return back to the top league. Thankfully, Week Four was the perfect opportunity to get the campaign back on track.

Dropping down a division meant SRFC was handed a bye in the opening round and a Quarterfinal win over Indy Eleven’s Ivory Coast would guarantee promotion back to the elite league. The clash against the Ivory Coast would be anything but easy, as the match-up created arguably the most memorable result of the tournament for Republic FC’s El Tri. 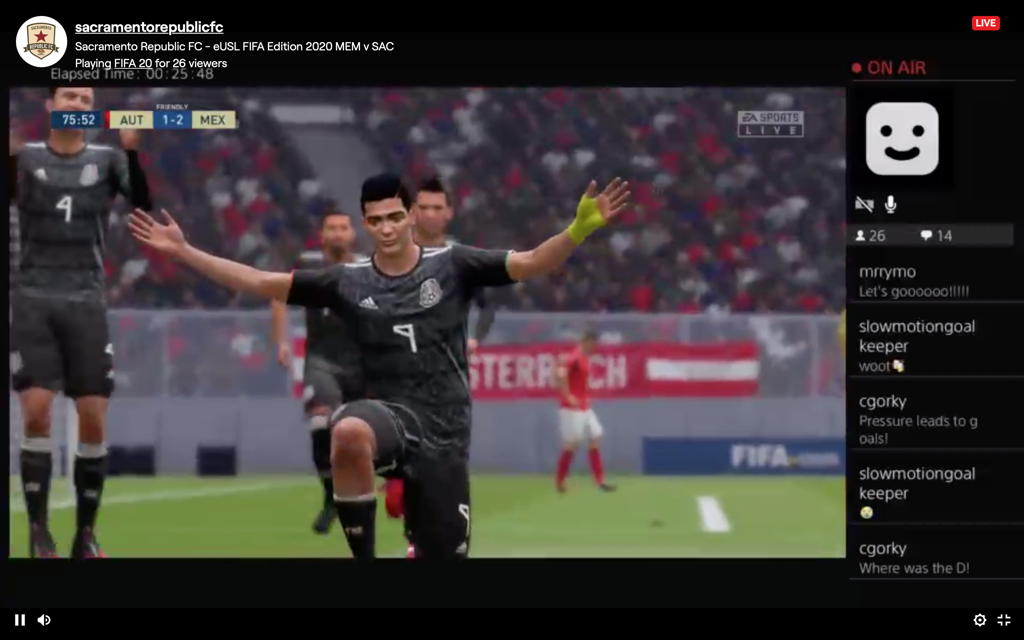 Sterk had the controller in-hand for the match and had his side on top nine minutes in after Raul Jimenez lifted Mexico to a 1-0 lead. Two goals from the Ivory Coast left El Tri trailing but back-to-back strikes from Rodolfo Pizarro gifted Mexico the advantage. Indy equalized moments later, meaning the best was still yet to come.

With the game inching towards the final whistle, Jimenez – who finished the competition with a team-best seven goals –  played a perfect ball into space for Hirving Lozano to find and fire a blistering game-winner to seal his side’s spot in a Semifinal showdown the following day a guarantee place in next week’s Division A bracket.

A Semifinal showdown against El Paso’s Argentina was waiting for SRFC the following day but Lionel Messi and Co. managed to stymie Mexico and pull off a 1-0 win. The result secured promotion back to Div-A and a spot in the Third-Place game the very next day. Mexico met Charleston Battery’s Greece for bronze but the Battery battled its way to a 2-1 win which ultimately was the last game for both sides. 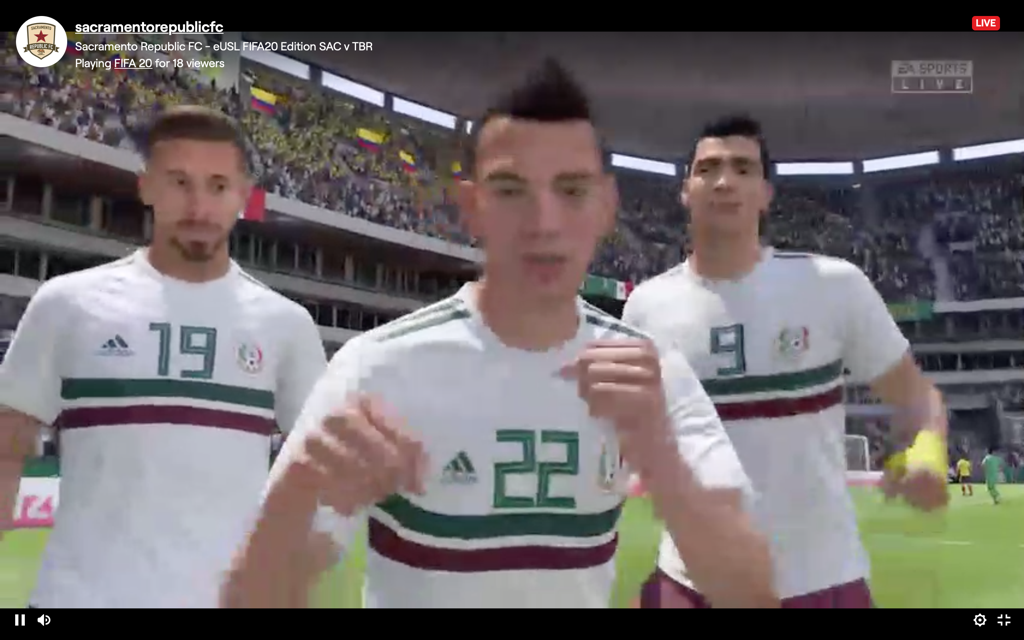 Following the announcement of a provisional return to play date of July 11 for the United Soccer League, the league announced completion of the eCup, ending a month-long gauntlet that pitted a total of 32 Championship and League One clubs against each other as national teams in FIFA20 for a promotion/relegation style divisional bracket. Rio Grande Valley FC – representing the Brazilian National Team – were crowned champions, sitting on the summit of the overall standings with 3,000 points.

All eCup fixtures were streamed on the club’s Twitch stream, twitch.tv/SacramentoRepublicFC/, and supporters of the boys in Old Glory Red can relive any of SRFC’s matches on the club’s twitch page as well.

Fans who kept tabs on Republic FC’s eCup contests had the opportunity to donate to club partner Raley’s Food for Families, the charity the Indomitable Club represented throughout the tournament.