Behind the Breakaway: LGBT+ Leaders on and off the Pitch

A trio of special guests join Connor Sutton on this week’s edition of the podcast including one of Stonewall FC’s celebrated cofounders – Aslie Pitter – and the man who dons the captain’s armband for the world’s most successful LGBT+ football club – Jay Lemonius.

It’s hard to think of a trio of individuals who have fought harder for inclusivity and equality in the global game more than Jay Lemonius, Aslie Pitter and Eric Najib.

And on this week’s edition of The Breakaway: A Republic FC Podcast, Jay, Aslie, and Eric all join Connor Sutton to discuss their pursuit of equality in the sport all three adore. 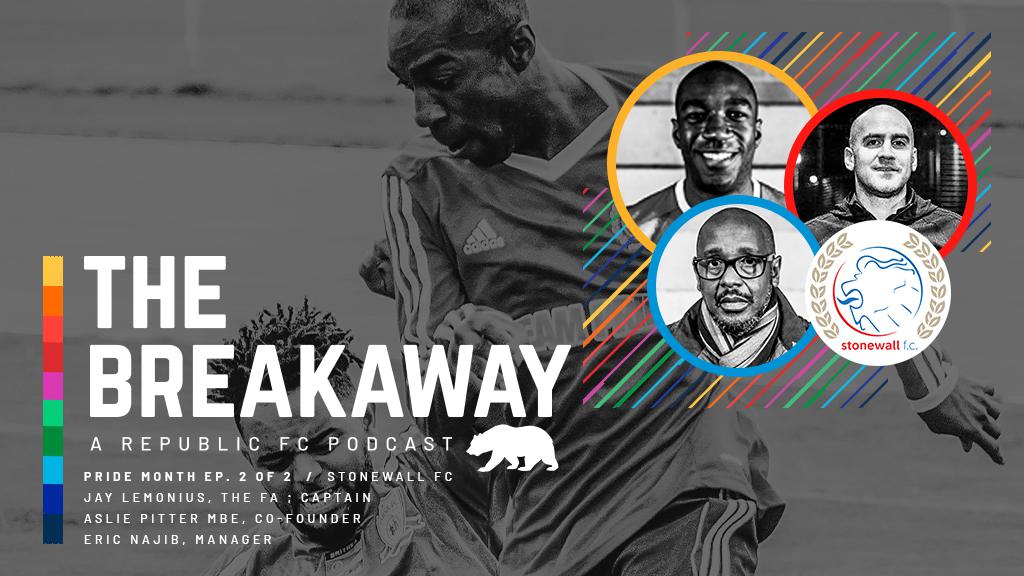 Jay Lemonius is the first-team captain for Stonewall FC, a London-based LGBT+ soccer club that fields three competitive teams fully committed to creating an environment in sport and the group has been a driving force in tackling discrimination within the sport and fighting against homophobia, transphobia and biphobia to keep the beautiful game beautiful.

The skipper tells Connor all about his current team that is also the most decorated LGBT+ club in the world, having won a number of international competitions and every single LGBT tournament the club has ever competed in, a Stonewall FC found its way to the final.

It means everything to Lemonius to be representing and playing for a club founded on the very fabric of something he’s so passionate about, and his passion for equality carries over to his profession as well. The Stonewall FC captain is currently the Senior Inclusion & Diversity Manager for the English FA and fans can listen to all of Lemonius’s selfless work for the LGBT+ community during the episode of the podcast.

Before joining England’s prestigious FA, Lemonius tells Connor he served as the Sports Campaign Manager for Stonewall UK, the largest LGBT charity in Europe. ‘Acceptance without exception’ is the charity’s powerful yet simple motto that Lemonius continues to fight for.

It was during his time with the Stonewall charity that Lemonius managed the Rainbow Laces campaign which the English Premier League supported in 2019 as players wore rainbow laces and each club’s captain donned a Pride-themed captain’s armband for all EPL fixtures from December 3-9. Each field featured Rainbow Laces pitch flags, ball plinths, handshake boards and substitution boards as well, similar to Republic FC’s Pride Night where the Indomitable Club also included Pride-themed nets in goal.

Throughout the episode, Lemonius tells Connor he’s constantly pushing for inclusion, and thankfully he’s not alone. During the episode, the leader in soccer’s global LBGT+ community is joined by a current teammate who helped found the club as well as his current head coach.

Aslie Pitter, a cofounder of Stonewall FC in 1991 who still plays right back for the club, joined the gents on the pod and took a fascinating deep dive into the history of Stonewall and the challenges the group overcame and conquered to create the dynasty that is celebrated across the world.

Pitter was a founding father of the celebrated club that was the first gay football club in all of Britain and for his work fighting for inclusivity in the sport, he was appointed a Member of the Order of the British Empire. And on the episode of The Breakaway, fans can learn about the unfortunate discrimination players faced in those days and how Stonewall FC became a beacon of hope for the entire LGBT+ community that wants nothing more than to compete at the highest levels.

The club’s manager, Eric Najib who has been at the helm since 2006 but joined Stonewall in 2001, also had his stories to tell on the episode and had a tremendous amount of respect for Pitter’s teams in the early years that paved the way for the club today.

Be sure to check out the episode where Connor chats with Jay, Aslie and Eric which can be found here.