Indomitable Club will host Tacoma Defiance at 7:00 p.m. as part of a slate of national broadcast matches during the USL season restart weekend 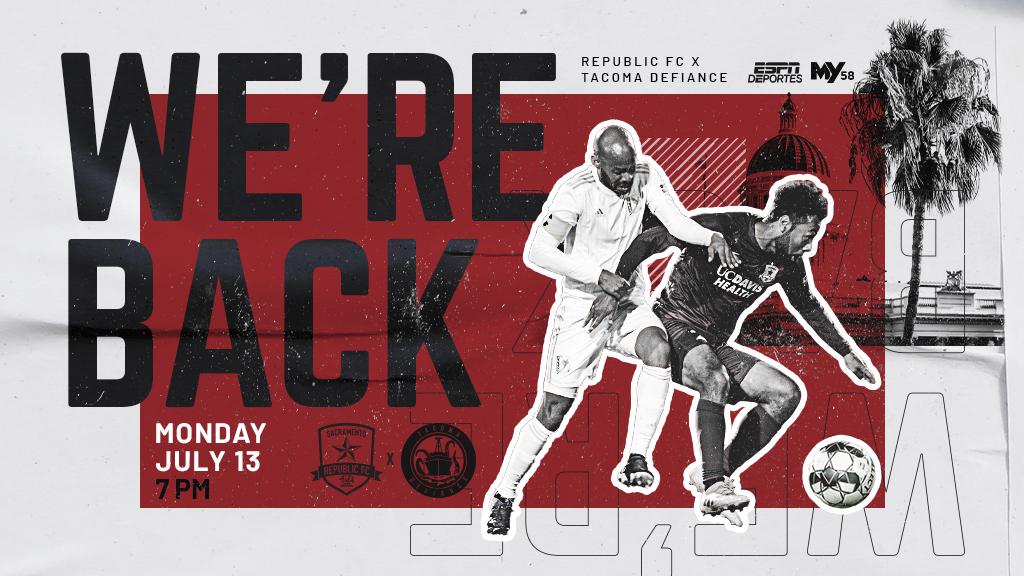 Live professional sports return to Sacramento for the first time since mid-March as Republic FC host Tacoma Defiance at Papa Murphy’s Park at 7:00 p.m. on July 13, as part of the restart to the 2020 USL Championship Season. Soccer continues to lead American sports leagues in a safe return to play and the USL Championship will be on display with five matches on the ESPN family of networks.

The Indomitable Club will wrap up the league’s restart weekend with its Monday match-up which will be locally broadcast on KQCA My 58 as well as nationally broadcast in Spanish language on ESPN Deportes.

With community health and safety as the highest priority, and after consultation with county health officials, this match will be played without fans in attendance. The club continues to work with local health officials and medical experts to explore options and potential opportunities to create a safe environment for hosting limited fans later in the season.

To keep fans connected with the matchday experience, fans are encouraged to join a new pre-game show and virtual watch party simulcast.

Thirty minutes before kickoff, Live from the Pitch with Connor Sutton – the club’s new pregame show on Facebook – will give fans a new matchday perspective with interviews, Q&A with club insiders, and live look-ins to warm-ups.

During the match, fans can join the club’s virtual watch party simulcast where they can interact with other fans, participate in games and contests, and be featured in the club’s match telecast while cheering for the boys in Old Glory Red.

To join a watch party, fans can RSVP at SacRepublicFC.com/virtual-watch-parties.

The full schedule will be announced soon but mark your calendars now for a return to play on July 13.