Sacramento, Calif. – Sacramento Republic FC and Raley’s have announced an expansion of their partnership. Beginning this Monday, July 13, Raley’s will be featured on the right sleeve of the Indomitable Club’s official on-field kits, pre-match warm-up top, and the Republic Youth Academy jersey sleeve. Republic FC will cap off the USL Championship’s return to play weekend with a match against Tacoma Defiance on ESPN Deportes, and locally broadcast on KQCA My58. The additional two-year commitment to the club’s partnership – initially formed in 2014 – will be the eighth kit sleeve sponsorship in United Soccer League’s top flight, and only the 14th agreement in place of the 61 teams in the two top tiers of American soccer.

“With Raley’s deep commitment to Sacramento’s families and neighborhoods, Raley’s is a natural addition to the kits designed to represent the indomitable spirit of the region, on and off the field,” said Republic FC President and Chief Operating Officer Ben Gumpert. “I remember fondly my trips to Raley’s in my neighborhood growing up in Sacramento. And now, I’m looking forward to continuing to work with the thousands of Raley’s team members who create a profound impact in our community year-round.”

“Raley’s is proud of our long-standing partnership with Republic FC. Both organizations are dedicated to the pursuit of excellence and together strive to make the greater Sacramento community more united and vibrant,” said Keith Knopf, Raley’s President & CEO. “We wish the club and all the fans a great season.” 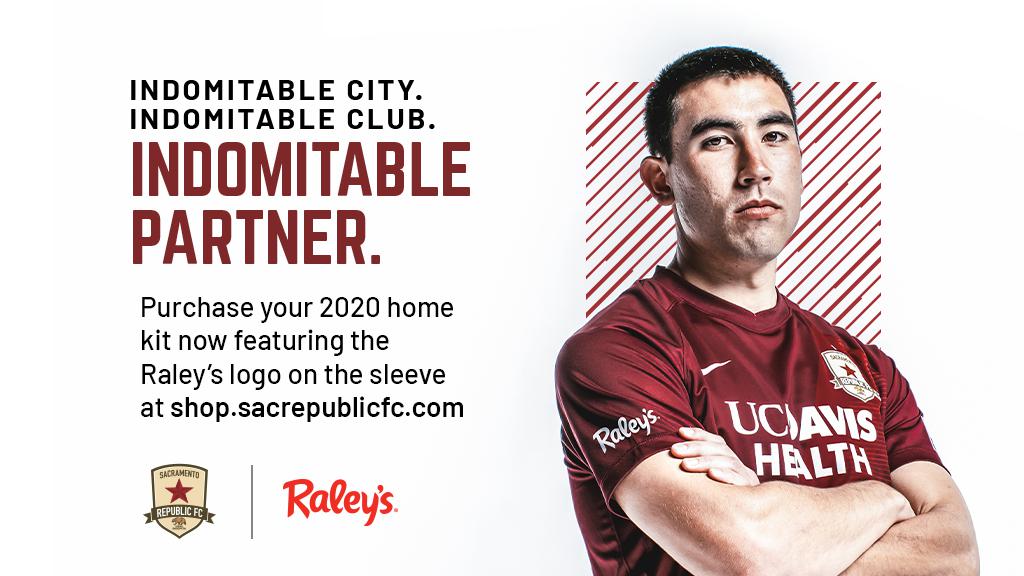 To celebrate the extension of the partnership, Republic FC and Raley’s will surprise and delight shoppers at select Raley’s locations this weekend with player autographed t-shirts, Republic FC swag, and more. Select Raley’s eCart pickup and delivery orders through the weekend will be randomly selected to receive one of the first 2020 Heritage Kits featuring Raley’s on the sleeve as well.

Raley’s and Republic FC’s most recent collaboration has provided support for the Capital Region’s most vulnerable populations during the pandemic. Through the Indomitable Hands program, Republic FC delivered nearly 7,500 meals in prepared and packaged Ready to Eat Bags from Raley’s to vulnerable, home-bound seniors throughout the region. Through twelve weeks, with an assist from Raley’s and the club’s generous supporters, the program raised over $75,000 to provide meals for seniors during the state’s stay-at-home orders.

The jersey is now on sale at the team store and fans can purchase their kit by visiting shop.sacrepublicfc.com.

About Sacramento Republic FC
Launched during Sac Soccer Day in 2013, Sacramento Republic FC exists to make California’s Capital Region into the most inspiring, energetic and rewarding place to live, work and play through the beautiful game. From its inception, the club smashed USL Championship records, and claimed the 2014 USL Cup in its inaugural season. Through an unrivaled level of support from its fans and community, the club will join Major League Soccer in 2022 and build a soccer-specific stadium in Downtown Sacramento, serving as a catalyst for the largest urban infill project in the U.S. The Railyards Stadium includes plans for an entertainment district to extend use beyond game days for fans and visitors year-round. For more information, visit SacRepublicFC.com.