Around the League – Championship Playoff Race and 2021 Expansion Club

While Republic FC inches closer to a postseason berth, the USL Championship welcomes a new team to the league next season

Republic FC are just one point in the Group A standings away from securing a playoff spot for the seventh straight season but a loss or draw for Tacoma Defiance against Reno 1868 FC on Thursday night will guarantee SRFC a trip to the 2020 USL Championship postseason before the Indomitable Club even lines up to play on Sunday.

Mark Briggs’ men picked up a point this past weekend following a 3-3 draw at home against Reno. A similar result this coming weekend against Tacoma at Papa Murphy’s Park will send the boys in Old Glory Red to the playoffs but the squad still has a lot to play for this season as they’re still hot on the tails of first place 1868 FC for the top spot in the group as both regional rivals sit on 25 points each. 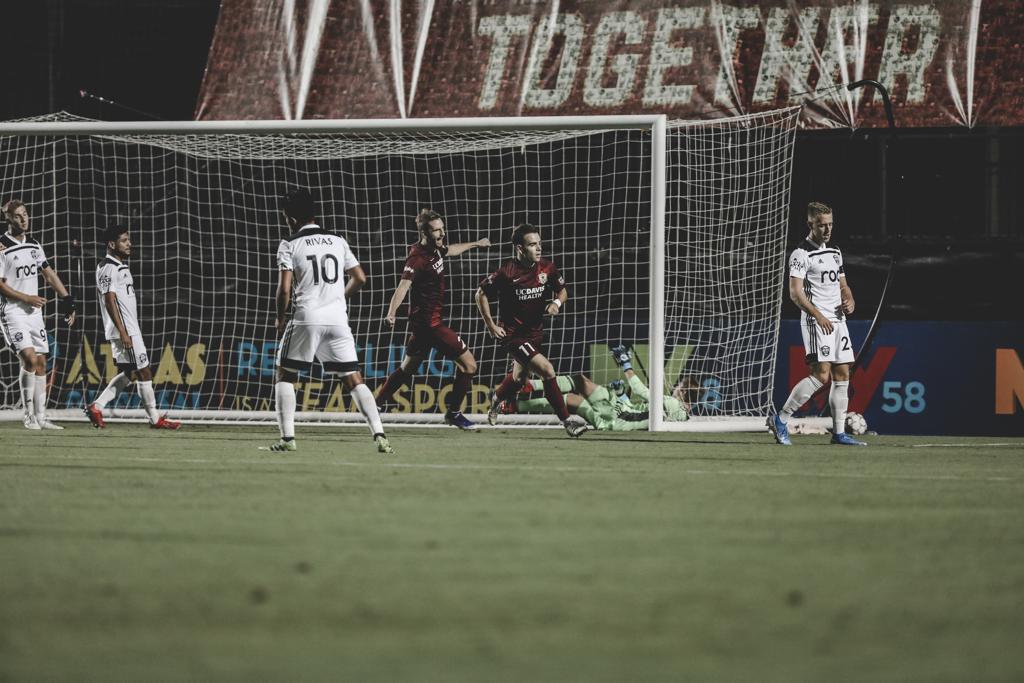 Sam Werner equalized in the 5th minute against Reno 1868 FC last Saturday after connecting with a Kharlton Belmar cross.

However, Group B is still very much up for grabs as Rising FC sits at the summit with 26 points while LA Galaxy II trails PHX by five points through 12 games after earning three points on Tuesday night following a 3-2 win over Las Vegas Lights FC. Both San Diego Loyal SC (19 pts) and Orange County SC (18 pts) are still in contention while Las Vegas is the lone club eliminated in the group but the standings might shake up in the coming days as OCSC hosts Lights FC on Friday night while San Diego visits Phoenix on Saturday night.

In Group C, technically all four clubs are still mathematically in contention but New Mexico United – 23 points – and El Paso Locomotive FC – 21 points – are steamrolling their way towards securing a spot in the playoffs. El Paso can leapfrog United Wednesday night if the Texan club can claim all three points against Colorado Springs Switchbacks tonight. Third place Real Monarchs fell 2-0 to New Mexico last Saturday but will look to bounce back at home against Portland Timbers 2 tonight in Utah.

San Antonio FC are just one win away from solidifying first place in Group D while second place is still a toss-up between FC Tulsa on 16 points, Austin Bold FC on 15 points, OKC Energy FC on nine points and even Rio Grande Valley FC’s three points are enough to keep the club from the Lone Star State in contention for the postseason. Tonight, San Antonio hosts Austin in a Texas-sized heavyweight bout and have major playoff implications for the rest of the group.

In the east, the battle for Group E is heating up with Louisville City FC on top with 23 points with Indy Eleven in a close second with 22 points. Not far behind is Saint Louis FC on 18 and Sporting Kansas City II’s 13 keep the club alive in the playoff hunt. Louisville slipped three by Saint Louis for a 3-0 win last Saturday and travel to Indy today in hopes of creating a larger gap at the top.

A playoff spot in Group F has already been locked down by Pittsburgh Riverhounds SC following a 5-0 win over Hartford Athletic last Saturday. Hartford still has control of second place but a win for New York Red Bulls II today over Athletic will see the NY side trail Hartford by just four points.

Last but not least, Group H has Tampa Bay Rowdies and Charleston Battery maintain a substantial lead from the rest of the group with 27 and 24 points respectively. Tampa Bay travels to Atlanta United 2 today while Battery host Miami FC on Sunday.

On Tuesday, the United Soccer League announced Oakland Roots Sports Club would become a member of the USL Championship beginning in the 2021 season.

Founded in July 2018 by six local soccer fans and investors, Roots has quickly grown into a cultural phenomenon in the United States soccer scene. Based in the heart of Oakland at Laney College Stadium, the club sold out its first five home games in club history and welcomed 5,723 fans to its home final last October.

Republic FC was slated to play Oakland Roots in the Lamar Hunt U.S. Open Cup this season prior to the cancellation of the 2020 competition due to the coronavirus pandemic.