Sacramento, Calif. – Sports Business Journal announced that Sacramento Republic FC Sales and Service Senior Director Ted Glick has been selected as a member of its annual New Voices Under 30 list, recognizing rising, global leaders in the sports industry. The 2020 cohort features young, diverse and impactful leaders, entrepreneurs, risk-takers and disrupters from the world’sleading sports leagues and teams, media properties and more. The annual list seeks to highlight the change agents who are eager to shift the traditional sports business. 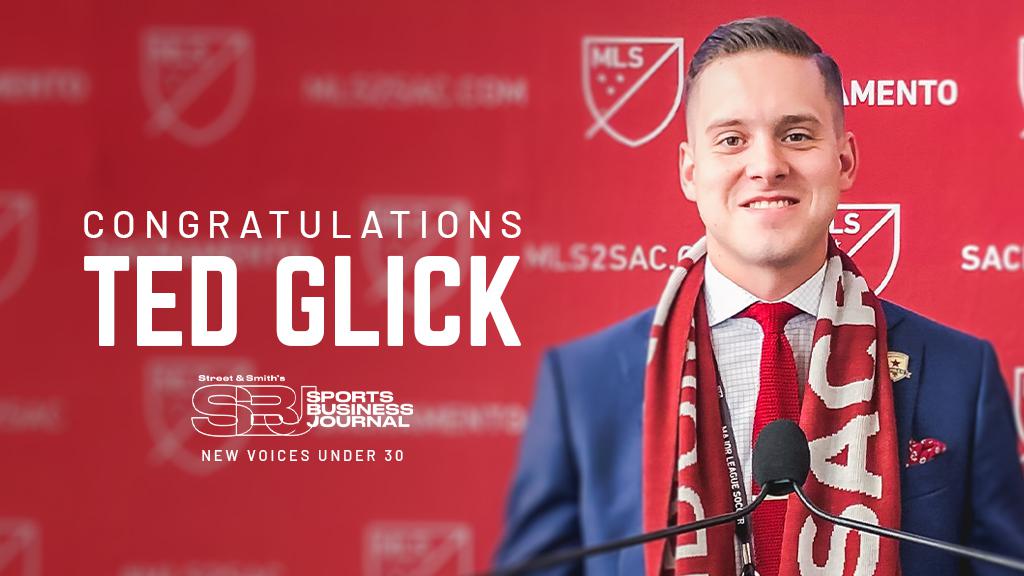 “It is incredibly humbling to be recognized with a class of tremendous leaders who will shift sports business into a new stratosphere – entertaining fans around the world for years to come,” said Senior Director of Sales and Service Ted Glick. “I owe an enormous debt of gratitude to my mentors, family and friends who have constantly supported me, as well as my SRFC teammates who have lifted me up along the journey - this club is special and I feel so fortunate to call Sacramento home.”

“Ted is a born leader whose commitment to his work and especially to his people is second to none,” said Republic FC President & COO, Ben Gumpert.  “We’re very fortunate in Sacramento to have a person of Ted’s drive, character, and class, and I have no doubt we will continue to see Ted leave his mark in this community and the sports industry as a whole.”

“We’re very fortunate to have a leader of Ted’s caliber and character at our Club, as well as in the Sacramento community,” said Chief Revenue Officer Dustin Vicari. “During maybe the most unique and challenging period of our lives, Ted consistently approaches each day as a set-up and not a set-back. His positive attitude is inspiring and continues to serve as the foundation of not only his department, but our Club’s overall culture. Ted will play a key role in developing our downtown stadium’s membership programs, which will set a standard across MLS and the sports industry.”

Ted joined Republic FC in 2018, as the club continued to set USL Championship records and work toward an expansion slot in Major League Soccer. The Boston College graduate’s developing career includes incredibly successful stints at Harris Blitzer Sports Entertainment where he rose through the ranks of the NBA’s Philadelphia 76ers and the NHL’s New Jersey Devils.

As the senior director of sales and service, Ted oversees a team of 15 responsible for developing Republic FC’s passionate fanbase, bringing. thousands of fans to matches and creating a lasting and memorable experience that they’ll want to enjoy over and over again. In the coming months, his team is set to grow as Republic FC works to build its new home in The Railyards for its inaugural season in Major League Soccer.

His leadership style – built on a foundation of team coaching and collaboration – is a core element of his New Voices Under 30 selection. His passion for developing his teammates has resulted in Republic FC’s continued success at the forefront of the USL, including league honors for Ticket Revenue during the 2018 and 2019 seasons.

This is Ted’s second time calling Sacramento home. From 2000-2005 when his father helped launch the Sacramento River Cats, Ted was kicking soccer balls in local public parks and playing little league in Arden. His fond memories of the community and early ties to Sacramento added to his decision to return, and help transform the city with a world-class, soccer-specific stadium in The Railyards.