By The Numbers: Jerome Kiesewetter

The Indomitable Club’s newest force up top comes with style, a high soccer IQ and a knack for both creating and finishing in the final third

Newly inked Republic FC forward Jerome Kiesewetter, acquired on loan this week from FC Tulsa, comes to the Indomitable Club with an attractive resume and a high-level skillset that makes him a force to be reckoned with in Mark Briggs’ attack. 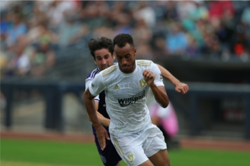 Kiesewetter brings a wealth of both club and country experience to Sacramento, having represented the United States in addition to spending time in Major League Soccer, the USL Championship and the Bundesliga.

Kiesewetter’s Bundesliga career led him across the Atlantic to a spot on the USYNT, logging minutes for the U18, U20 and U23 sides. His prowess at the youth level earned him two caps with the senior squad under then-head coach Jurgen Klinsmann before making a name for himself in the USL Championship.

Now with the Republic FC, Kiesewetter has done well to log some impressive numbers over the course of his playing career.