Sacramento Republic FC grabbed a crucial three points on Saturday with a 3-1 win over New York Red Bulls II at Heart Health Park. Now, the boys in Old Glory Red shift the momentum to Thursday in a quick turnaround at Tacoma Defiance.

Thursday’s kickoff in Tacoma is set for 7:00 p.m., as SRFC looks to keep its recent run of form going in the Pacific Northwest.

Republic FC (4-6-4, 16 points) is fresh off a 3-1 win over New York Red Bulls II at Heart Health Park. Luis Felipe’s game winner in the first half sealed the midfielder’s first career brace, as the boys in Old Glory Red have now secured seven points in their last three games. 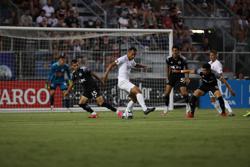 Darek Formella recorded a goal and an assist in the 3-1 win over Red Bulls II, while Duke Lacroix earned his second assist of the season after helping Felipe notch his game winner in the 22nd minute.

Felipe and Lacroix were rewarded with USL Team of the Week honors for Week 15 after putting Republic FC on the cusp of the final playoff spot in the Pacific Division. Three points this weekend at Tacoma will put the Indomitable Club in sole possession of that final spot, as Sacramento currently has games in hand over Las Vegas Lights FC and LA Galaxy II.

Contrary to last week’s opponent for the Indomitable Club, Tacoma Defiance enters Thursday’s matchup as a club that neither scores nor concedes a lot.

Tacoma has logged just three goals in its last five games, despite securing points in all but one outing. The Defiance are coming off three draws in their last four games with just one goal to show for it, including a scoreless meeting with New Mexico United on Sunday. Four players share the team lead for goals scored with two, and at 4-5-4, the club is tied for second to last in the USL Championship with 13 goals to their credit.

Defensively however, the Defiance live up to their name. The Pacific Northwest side has conceded just 15 times on the season and just four times in their last five games. Tacoma has not conceded twice in a game since falling 4-2 to Switchbacks FC on June 16, which concluded a gruesome three-game stretch of nine goals against.