On Wednesday, Sacramento Republic FC head to the Bay Area for the first of two remaining matches against Oakland Roots SC. On the heels of a 1-1 draw in Tacoma, Republic FC look to claim more points on the road in pursuit of the playoffs.

Republic FC comes into the midweek divisional fixture after a 1-1 draw at Tacoma Defiance on August 5. Jerome Kiesewetter opened his SRFC scoring account in the 18th minute thanks to Duke Lacroix’s third assist of the season. Dan Casey’s continued command of the back line has helped the Indomitable Club grab a result in four consecutive matches. 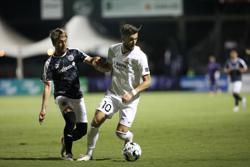 How about Roots SC?

The hosts for Wednesday’s match enter with a 1-8-3 record after Sunday’s 3-1 defeat to the same Defiance side SRFC faced on Thursday. After a scoreless draw with Republic FC on July 7, Oakland Roots SC has since dropped five straight entering Wednesday while conceding three goals in three of those five outings.

Roots SC’s struggles in its inaugural USL Championship year continue, as the side is last in the league in goals (8) and shots (98). They are the only club in the USL Championship this season yet to record 10 goals and 100 shots.

Republic FC and Roots SC have played to draws in each of two previous matchups this season. The two sides last faced off at Heart Health Park on July 7, playing to a scoreless draw.

Contrary to the most recent meeting, the clubs’ first-ever meeting on June 2 in Sacramento saw an offensive outburst with three goals apiece. Darek Formella opened the scoring, and the Indomitable Club twice fought back from down a goal to grab a point in the newly-established fixture. Cam Iwasa and Jordan McCrary also found the back of the net for the boys in Old Glory Red.