Around the Leagues: Brazil and Canada Claim Olympic Gold

More exciting play across all levels over the weekend continued, as Major League Soccer yielded another week of great competition and the USL Championship maintained tight races in every division here at home. Abroad, two Gold Medals were awarded in Tokyo as Olympic play wrapped up, and the worlds’ most-watch league is just about ready to return to action for its 30th year.

A number of teams remained hot over the weekend in USL Championship play, while a few others had impressive streaks snapped against division rivals. Every division is seeing a competitive race as the season reaches the halfway mark.

In the Atlantic Division, Pittsburgh Riverhounds SC notched their fourth straight victory with a win over Charleston Battery. The result keeps them three points ahead of Tampa Bay Rowdies, who took a 2-1 result from New York Red Bulls II. 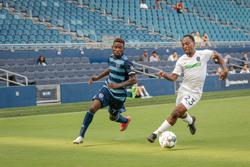 After impressive stretches throughout the month of July, two clubs had unbeaten streaks snapped over the weekend. Memphis 901 FC lost for the first time since June after earning points in five straight matches, falling 4-1 to OKC energy. Phoenix, who entered the weekend as possibly the hottest team in the league, drew Las Vegas Lights FC 2-2, ending their four match win streak.

With the halfway point of the season just around the corner, nearly every division is seeing a tight race for playoff position. Following Las Vegas’ 2-2 draw, Lights FC and Republic FC are both just four points back of Tacoma for fourth place in the Pacific Division. The Mountain and Central Divisions both have four clubs all within two points of each other, while the Atlantic has two clubs within four points of fourth place.

It was a week of close matches across Major League Soccer, as only five of the league’s 25 fixtures last week were decided by more than one score.

In the Western Conference, San Jose took their second victory in their last three matches, taking down LAFC 2-1 after drawing with Portland on Wednesday. The Bay Area side now sits just two points outside of the final playoff spot at the 2021 season’s halfway point.

FC Dallas faced off with Austin FC in a meeting between Texas Rivals. Behind scores from Ryan Hollingstead and 20 year old Academy product Jesus Ferreira, the first ever contest between the two clubs went the way of Dallas in a 2-0 result at Toyota Stadium.

The Tokyo Olympics wrapped up over the weekend after two weeks of excellent competitions.

On the Women’s side, Canada came away with gold after a penalty shootout with Sweden. After going down 1-0 in the opening half, Canada pulled even with a 67th minute penalty score. The two teams would remain tied through extra time before proceeding to penalties, where Canada would outshoot their opponents 3-2.

Just keep saying it until it sinks in! #CANWNT are Olympic Gold Medallists! #Tokyo2020 #CANWNTGold pic.twitter.com/I5eWAKpaQ1

On the Men’s Side, Brazil overtook Spain 2-1 in the final to secure their second straight Gold in football at the Olympic Games. A 108th minute score would decide the contest after the two teams finished 90 minutes tied 1-1.

The US women secured Bronze with their 4-3 defeat of Australia in the match for third place, while Mexico took Bronze after defeating Japan by a score of 3-1 on the Men’s side.

On Friday, the English Premier League kicks off the 2021-22 season when Brentford- making their first appearance in England’s top flight since 1947- plays host to Arsenal. A full slate of matches follow on Saturday and Sunday as the league celebrates its 30th official season.

Joining Brentford in promotion to the Premier League this season are Norwich City and Watford, who both return after one season of play in the EFL. Watford most recently spent five seasons in the League between 2015 and 2020, but was relegated for the 2020-21 season, while 2021-22 will mark Norwich City’s 10th Premier League campaign and sixth since 2011. They replace Fulham, Sheffield United, and West Bromwich Albion, who were all relegated to the EFL following bottom-three finishes in 2020-21.