After splitting points with their Bay Area rivals in the midweek fixture, the Boys in Old Glory Red now turn their attention to a Saturday showdown at Heart Health Park in a Las Vegas Lights FC fixture that has been kind to Sacramento Republic in 2021.

The quick turnaround gives Republic FC a chance to move up another spot in a tight Pacific Division race. Sacramento sits among four teams within six points of each other competing for three playoff positions behind division leading Phoenix. 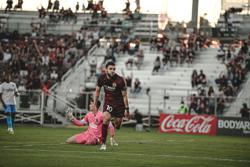 Republic FC (4-6-6, 18 points) are unbeaten in their last five matches, dating back to a July 14 2-1 victory in Las Vegas thanks to a first-half brace from Tucker Bone. A crucial point in Livermore on Wednesday saw the Boys in Old Glory Red climb a spot in the Pacific Division standings, with LA Galaxy II sitting one point ahead.

The back line play of Hayden Sargis continued to progress on Wednesday, as the Academy product logged a game-high five clearances in the Northern California derby while playing a full 90 minutes for the ninth time this season. Republic FC’s defense held Roots SC to just seven shots on the night, the lowest by an SRFC opponent in the last six games. The impressive streak dates to July 7, when the Indomitable Club allowed just three shots to the same Roots SC side.

What about the visitors?

Lights FC (5-9-2, 17 points) enters Saturday’s matchup one point below the SRFC in the Pacific Division table. Las Vegas is fresh off a spirited draw of their own, earning a point in a 2-2 draw with Phoenix Rising FC at Cashman Field. After Las Vegas went ahead 1-0, Phoenix scored twice unanswered before Mohamed Traore found the equalizer for the home side in the 84th minute.

The Nevada club has recently stepped up against Pacific Division powers. The 2-2 draw with Rising FC made it two straight unbeaten matches for Las Vegas following a 3-1 win over Orange County SC on July 27.

Saturday marks the third matchup of the season between the two sides, with the Indomitable Club boasting a 2-0-0 mark against Lights FC on the year. The last time SRFC entertained Las Vegas at Heart Health Park, Republic FC put up three goals in the home opener that welcomed fans back for the first time in 14 months. Republic FC followed a similar storyline at Cashman Field on July 14, coming away with all three points in a 2-1 win.