What to Watch Across the USL: Week 17

With most clubs across the half mark, the playoff races are tightening up around the league.

Phoenix leads the race for the Pacific Division title, despite coming off a 2-2 draw with Las Vegas Lights FC that snapped a run of four straight wins. Phoenix will try to get back in the win column in a top-two matchup with Orange County SC on Saturday. LA Galaxy II at 19 points, picked up a crucial three points after a 3-2 win over Orange County, who’ve now won just once in its last six games and will look to turn things around against Rising FC.

Tacoma Defiance are now solely in fourth place with 21 points after a 3-1 win over Oakland Roots SC on Sunday. Including the 1-1 draw with the Indomitable Club last week, Tacoma have now earned a result in six straight matches. The Defiance will look to go level in the table with San Diego on Saturday, as a Tacoma win SD Loyal will give both clubs 24 points. The Indomitable Club is knocking on the door with 18 points, and 11 matches against the three teams ahead in the standings. 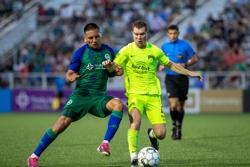 Hartford have lost three of their last five – including a 4-2 defeat to Colorado Springs – while Tampa Bay enters the weekend winners of two of their last three after a three-game losing streak.

Friday’s matchup from Florida will see two likely playoff teams try to get back on track, while it’s another chance for Hartford to distance itself from the rest of the Atlantic Division. Three points from the Connecticut club would keep them in fourth ahead of Charleston, who faces Loudon United on Friday while sitting just two points out of the playoffs.

Tampa Bay and Hartford have already traded 1-0 victories this season, with the visiting club taking the points on both occasions.

Staying in the Atlantic Division, Pittsburgh looks to keep its hold on the division crown with the Charlotte Independence standing in their way. Three points for the west Pennsylvania side would be a fifth win in six matches after a 3-2 loss to Miami FC on Wednesday, as well as a stronger grasp on the top spot. Three points for Charlotte bumps them ahead of Hartford for fourth place.

Depending on how these first two matches shake out, we could be seeing a different top four in the Atlantic Division come Monday morning.

Memphis 901 FC and Birmingham Legion FC face off Saturday in a Central Division fixture with major playoff implications for Memphis. Currently sitting two points out of fourth place in the Central Division, 901 FC faces a golden opportunity to leapfrog several playoff contenders in the division. The club sits in sixth currently, two points out of a three-way tie for third. Meanwhile, Birmingham Legion FC has nothing to lose with 36 points in hand and a firm grasp on second in the Central Division. The two clubs have already traded 1-0 victories this season and are two of the most defensively sound sides in the Eastern Conference.