Indomitable Club puts on offensive clinic with 24 shots in win

Saturday’s return to Heart Health Park for Sacramento Republic FC was an offensive outburst that saw record numbers and three critical points in the Pacific Division race. The Boys in Old Glory Red recorded 24 shots and the overcoming of an early one-goal deficit added to the sweet feeling of three points at home for the second consecutive time. 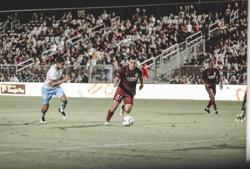 Man of the Match Cam Iwasa found the back of the net twice on Saturday for the Boys in Old Glory Red. Not only did the pair of goals move the Sacramento native into eighth on the USL Championship all-time scoring list, but Iwasa’s chip in the 73rd minute that stood as the game-winner secured a critical three points in the Pacific Division.

Iwasa also led all players with eight shots on the night. In addition to three of the eight being on frame, the forward also created three chances for the Indomitable Club.

Republic FC recorded 24 shots on the night off the feet of seven different players. Behind Cam Iwasa’s eight, Kharlton Belmar recorded five and Darek Formella followed up with four while notching his third assist of the season. Duke Lacroix, Mario Penagos, and Luis Felipe all finished with two.

It was the first double-digit shot outing for Republic FC since July 14, and the highest shot total for SRFC since logging a club-record 37 at San Antonio FC in June of 2018. The club also put nine shots on target- their highest mark in the category this season.

Three points wasn’t the only thing to celebrate on Saturday, as Republic FC also won the possession battle with 55% for the match and completed 83% of their passes.

In his 100th career USL Championship appearance, Lacroix would lead the squad with 53 successful passes, including a team-high 36 in the attacking half. The midfield unit of Felipe, Penagos, and Villarreal combined for five of the 24 shots, while Villarreal lobbed a team-high eight crosses into the penalty area cand carried an efficient 90.4 passing percentage.