The beautiful game continued to generate all kinds of storylines this week. As Major League Soccer gets ready to pit the league’s best against the top performers of Mexico’s Liga MX, USL play continues to deliver constant shuffling in the standings as the second half continues. Megan Rapinoe returned to NWSL play in dramatic fashion, while the Premier League continued its 30th season with a great slate of second week games.

After falling to fourth in the Pacific Division table last week, Orange County SC secured a crucial win on Saturday, taking down San Diego Loyal SC 2-1. The victory lifted OCSC to second in the standing after a mid-season slide that saw them drop two of three to Phoenix, Tacoma, and cross-town rival Galaxy II. 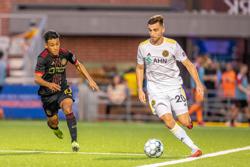 The Atlantic Division continued to see shuffling at the top in Week 18. Pittsburgh Riverhounds SC defeated Atlanta United after a draw with Tampa Bay Wednesday, while Miami came away victorious over Hartford Athletic. The Division now sees three squads within three points of each other for first place, and three squads all tied for fourth with 27.

Louisville City FC had their four-match win streak snapped by OKC Energy FC in a 0-0 draw Saturday. They remain ahead in the standings however, with Birmingham Legion FC’s loss to FC Tulsa on Sunday.

Arsenal fell 2-0 for the second straight match, this time at home to Chelsea, who entered the weekend missing a number of key contributors. The Gunners now find themselves as one of just five clubs to drop their first two matches, while Chelsea finishes week two on top of the league table.

Brentford’s positive start to their first season in the Premier League continued on Saturday. The club came away with a point in a 0-0 draw with Crystal Palace, and will look to claim points for the third straight match when they take on Aston Villa, who has split their first two. The West London club is one of five clubs that has yet to concede a goal so far this season.

After the season’s first two weeks, Manchester United holds the league lead in scoring, bagging a combined six goals against Southampton and Leeds. Five of their scores have come off assists from Paul Pogba, and three have come off the feet of Bruno Fernandes, who leads the Premier League in the category. Chelsea, Liverpool, and Everton have all tallied five scores in their first two matches. 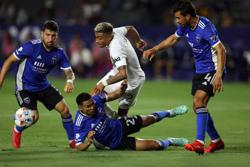 Following their tenth straight match without a loss over the weekend, San Jose Earthquakes climbed into a playoff spot after taking down LA Galaxy 2-1. The Western Conference remains crowded, however, as five clubs -- San Jose, Vancouver, Dallas, Portland, and LAFC  -- all sit within four points of each other for the final playoff spot.

New England kept their strong season going with a 3-2 victory over D.C. United, widening their already comfortable Conference lead over Orlando, who drew with Nashville 1-1 over the weekend, to 15 points. Atlanta gained ground with a win over last-place Toronto, pushing the Georgia club into a tie with D.C. United for the East’s last playoff spot.

MLS gets a break this week as the League’s all-star festivities commence from Los Angeles. For the first time, this year’s event will feature the MLS All-Stars against their counterparts from Mexico’s Liga MX in a match sure to bring plenty of interest. Kickoff is set for Wednesday evening at 6:30 p.m. PT.

Liga MX took this round.

NWSL play delivered some exciting contests over the weekend as the push for playoff position continues.

OL Regin continued their climb in the standings over the weekend with a 2-1 victory over Gotham FC. After going into the final minutes tied 2-2, USWNT veteran Megan Rapinoe converted on a penalty in the 91st minute, securing both a brace and three points for the Washington club in her first appearance since June 26.

Washington took down Orlando Pride in an exciting matchup on Saturday. Orlando broke the 0-0 tie midway through the second half,but Washington wouldn’t wait around to break even, finding the net just a minute later. Spirit forward Ashley Sanchez would net a spectacular goal from 25 yards out in the 89th minute, securing the nation’s capitol a victory and a tie for third place.