While Republic FC took to the field for training on Tuesday, they did so far from their normal venue.

Instead, Mark Briggs’ men took to the grounds of Folsom State Prison to hold a training session before a group of 125 spectators from the facility. The session marked the renewal of a program that originated in 2018, a then-monthly initiative that saw Republic FC staff take part in monthly pickup games with those incarcerated, coached by a small group of players.

This time, however, Republic FC’s entire squad made the trip. After making their way through the facility’s security checkpoints, around the 5th cell block and into the main prison yard, players laced up their boots and got to work preparing for this week’s crucial division matchup with San Diego. 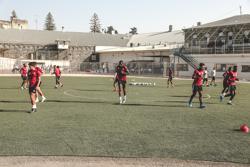 From the start, it was an experience unlike any other. After all, being inside the walls of California’s second-oldest correctional facility brings its own combination of surreal and uncomfortable feelings.

However, after training began and the mindset of preparation took over, those feelings quickly evaporated for the Boys in Old Glory Red. Smiles took over every member of the Indomitable Club as cheers emanated from those who came to watch, becoming immediately invested in the team’s possession and shooting drills. The spectators rallied around equipment manager Alejandro Caparelli, who substituted in at goalkeeper, and resembled a passionate group of fans eager to watch their team and engage with the game.

“You can tell they all love the game of soccer and follow the team,” said forward Cameron Iwasa. “They were talking to us about our games, and thanked us for coming. This was clearly big for them.”

After the session, Republic FC players and staff took to the fence-line to interact with those who watched the session- all of which were more than ready to talk soccer. 19 year-old academy product Julian Chavez talked with incarcerated persons for nearly 30 minutes about his performance during the 2020 season, and a group cheered on “goal scorer” Tucker Bone, who made the trip despite his season-ending injury, as he made his way over.

“This was tremendously rewarding,” said Coach Mark Briggs. “I think we were all really impressed with everyone who we interacted with. What they knew about the game and the team was amazing. Experiencing this is something everyone will remember.” 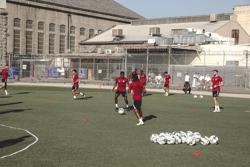 Before the club departed, Caparelli left his boots and two of the team’s training balls for those who came to watch. While a small gesture, it represented the club’s goal in returning- to give back, show compassion, and form positive relationships with the facility's incarcerated persons.

“This is an experience unlike any other,” said Republic FC President and General Manager Todd Dunivant. “It is amazing to be able to talk with some of these people and break down the walls between us.”

While returning to Folsom Prison was a long time coming, Republic FC plans to resume monthly visits as soon as next month to play games with staff and small groups of players- similar to the club’s visits in 2018 and 2019. But after the success- and impact- of Tuesday’s training, bigger events including the whole team are likely to happen on a more regular basis.