Despite falling to San Diego Loyal SC in the two teams’ second meeting of the season on Saturday, Republic FC did well to manufacture chances on the offensive end. Cam Iwasa led the way for the third straight match, while Jaime Villarreal remained excellent in the midfield in his return from injury. The club also showcased two new additions that made their first appearances with Sacramento.

Since the club’s draw with Oakland on August 11, forward Cameron Iwasa has led the Republic FC’s offense with 19 shots and three scores.

Iwasa led the way for Sacramento’s offense yet again on Saturday, finishing with six shots- three of which came from close range- and completing 87% of his passes. He also bagged the Indomitable Club’s only score on a 39th minute penalty after San Diego’s Miguel Ibarra fouled Mario Penagos inside the box.

Since re-entering the starting lineup on August 14, Jaime Villarreal has transformed Republic FC’s attack. The midfielder was excellent against San Diego, finishing with two shots and completing at least 82 percent of his passes for the third straight contest.

In three matches since Villarreal’s return, the club has posted 62 shots- an average of over 20 per match. His distribution has also been critical over that span, creating eight scoring chances and allowing the club to hold the possession edge in each contest. 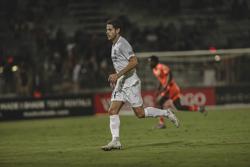 Two members of the Indomitable Club made their team debuts on Saturday.

Emil Cuello, acquired last week on loan from San Antonio FC, entered at half time for Darek Formella to mark his first appearance with Sacramento. The midfielder made an immediate impact on the attacking end, having a close range shot blocked just one minute into the second half. He created two more chances before the final whistle sounded, but both would see shots go just wide of the right post.

Academy product Amjot Narang was made available for selection for the first time on Saturday,  making his first ever professional appearance since his addition to the first team on a USL Academy Contract. He logged 10 minutes in his pro debut after entering for Jaime Villarreal late in the second half.

Narang is the sixth current or former member of Republic FC’s academy to appear in a match this season, joining Mario Penagos, Hayden Sargis, Nabi Kibunguchy, Julian Chavez, and Rafael Jauregui. Republic FC academy products have appeared in all but two matches this season, logging just under 2,200 minutes and combining for one goal and one assist.