Around the Leagues: Flipped scripts make for dramatic weekend

Weekend soccer sees excitement brew at the top of the tables

Playoff hopefuls turned into playoff contenders with big performances at the right time, and drama at the top of the tables added to the chaos that only late-season soccer can bring. In the Premier League, a return for the ages and a now-crowded top of the table were the weekend’s big tickets.

Oakland Roots SC played to a scoreless draw with a dangerous San Diego Loyal SC team in the East Bay and have now gone unbeaten in eight of their last nine matches ahead of a key game this weekend with Tacoma Defiance.

Austin Bold FC’s climb in the Mountain Division continued over the weekend. The Texas club earned consecutive wins for the first time all season, with a 1-0 win over New Mexico United to move above Rio Grande Valley FC for final playoff transfer spot in the division.

Miami FC ran its unbeaten streak to eight games over the weekend with a 2-0 win at Memphis 901 FC while a highly contested matchup between FC Tulsa and Birmingham Legion FC ended in a 1-1 stalemate to keep Legion FC two points clear of Tulsa for second place in the Central Division. The top of the Atlantic Division continued to come down to the wire after Tampa Bay (49 points – 6-0 with over New York Red Bulls II) and Pittsburgh (47 points – 5-0 win over Loudoun United) steamrolled through the weekend.

The long-awaited return to Old Trafford for Cristiano Ronaldo did not disappoint, with the Portuguese international scoring twice in Manchester United’s 4-1 win over Newcastle United over the weekend.

Manchester City enacted revenge on Leicester City for the FA Community Shield defeat with a 1-0 win over the Foxes on Kelechi Iheanacho’s penalty in the 89th minute. Meanwhile in North London, Arsenal picked up its first win of the season with a 1-0 victory over Norwich City.

Former Gunner Patrick Vieira picked up his first win as Crystal Palace manager with a 3-0 win over Tottenham Hotspur. The first three goals conceded by the other North London side this season effectively dropped first-place Spurs to seventh in the English topflight. Chelsea, Everton and Liverpool all secured three points to enter a four-way tie with United at the top of the table.

Chelsea and Tottenham headline this weekend’s Premier League slate with a London derby on Sunday.

Atlanta United made major strides towards the postseason this weekend with a convincing 3-0 win over Orlando City on Friday. Atlanta has now gone 4-1-0 since appointing Gonzalo Pineda as manager on August 12 and currently sits a point under the Eastern Conference playoff line. 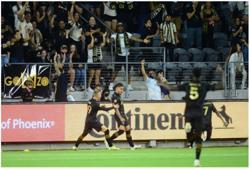 The New England Revolution erased an early deficit to pad their Supporters Shield case with a 2-1 win over New York City FC on Saturday, while DC United remained in the thick of the playoff race with a 1-1 draw against the New York Red Bulls.

Real Salt Lake erased a pair of one-goal deficits yesterday at Banc of California Stadium, but an own goal did the Utah side in. LAFC took all three points to tie RSL in the Western Conference table at 30 points.

Orlando Pride got back to winning ways on Saturday with a 3-1 win over Racing Louisville, while Sophia Smith’s goal in the 57th minute kept Portland Thorns atop the NWSL table by a slim three points.

Reign has now won an impressive eight of its last 11 matches and will put that streak to the test this weekend against Orlando Pride before a highly anticipated clash with the Thorns on October 2.