What to Watch Across the USL Championship: Week 23

Playoff positioning at a premium heading into the weekend

Momentum will play a big part across the USL Championship this weekend with clubs looking to extend winning streaks and snap losing streaks. A historic scoreless run is primed to keep going in Tampa Bay while the Pacific Division continues to toss and turn with results that can change the trajectory of a club’s postseason fate.

A five-game winning streak for Phoenix Rising FC can stretch to six with three points on Saturday at Tacoma. Meanwhile, the Defiance will try to snap a four-game winless streak after falling to the Indomitable Club on Wednesday in Washington. Oakland Roots SC’s climb through the Pacific Division table continued Wednesday with a home win over San Diego Loyal SC, and the East Bay side now sits fourth in the division ahead of Saturday’s match at Orange County SC. 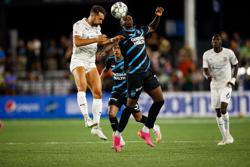 What started out as consecutive wins for the first time all season for Austin Bold FC has quickly turned into a potential four-game unbeaten streak after a 1-0 win at FC Tulsa over the weekend and a 2-2 draw with El Paso on Wednesday. Saturday is Colorado’s fourth straight game against a Texas club after draws with RGV Toros and El Paso, followed by a win over RGV this past weekend.

An Austin win can put Colorado on its heels with just two points separating the sides, while a win or draw for Switchbacks FC will have them solely in second place in the Mountain Division.

A much-needed midweek win over Real Monarchs snapped a five-game losing streak to keep Hartford in the Atlantic Division playoff picture, but now, their first of back-to-back home games against divisional opponents will be the litmus test the Connecticut side must pass to cross over the playoff line. Juan Obregón Jr. will play a big role in Saturday’s matchup after scoring three goals in his last five games.

Energy FC picked up a point against Birmingham Legion FC last weekend with 50 percent possession, their most since August 14 against this Sunday’s opponent in Indy Eleven. OKC remains two points above the playoff line despite being winless in their last three matches.

Indy Eleven has signed 2018 USL Championship MVP Emmanuel Ledesma to beef up its attacking midfield in their push for the playoffs ahead of Sunday’s game in Oklahoma. Wednesday’s 1-0 loss to Memphis did not help the push, dropping the club to seventh in the Central Division. With spots four through seven separated by just two points, though, Indy can make up for its midweek blemish with three points on Sunday.