Following the Indomitable Club’s exciting 3-1 win over Tacoma Defiance at Heart Health Park, the Boys in Old Glory Red have a quick turnaround ahead of their next match – a mid-week meeting with NorCal rival Oakland Roots SC. Sacramento will look to make it two in a row, and secure three points for the against the Bay Area side in their final meeting of the season. 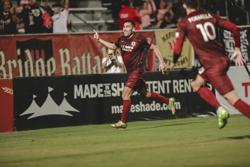 Sacramento enters Wednesday coming off a three-goal performance. In their third meeting with Tacoma Defiance, Sacramento pulled ahead early on a Cam Iwasa score in the 8th minute, and added two more from Emil Cuello and Luis Felipe in the second half. The victory kept Sacramento in the thick of the playoff race in the Pacific Division, and also kept the club unbeaten this season in matches where they have scored first.

Saturday’s win also marked a number of firsts for Republic FC. Emil Cuello bagged his first goal with the club in the 66th minute, and recorded his first career assist since coming to the Capital City on Luis Felipe’s 77th minute banger. Goalkeeper Carlos Saldaña performed well in his first ever professional appearance and SRFC debut, tallying three saves.

Oakland enters the contest coming off an eventful 2-2 draw with Las Vegas Lights on Saturday. After taking a 2-1 lead in the final minutes, Las Vegas – who was down to ten men after a 73rd minute ejection – netted an equalizer in the 93rd minute.

After a tough start to the season, Roots SC has turned things around, taking three in seven of their last 12 matches. They’ve outscored their opponents 19-13 over that span behind contributions from across the board, seeing eight different players find net since August 21.  The club currently sits a point back of Republic FC in the division table going into Week 25.

Wednesday will be the fourth regular season meeting between the two sides, and the final time showdown in the 2021 campaign. The three previous contests have all resulted in draws – the two clubs tied 3-3 at Heart Health Park in June, and saw each of their last two contests end scoreless on July 7 and August 11.