SACRAMENTO, California (October 7, 2021) – Sacramento Republic FC is heading south for its second consecutive road game on Saturday when the Indomitable Club visits San Diego Loyal SC for the third time this season. Republic FC is looking to reset after falling to Oakland Roots SC, for the first time – 2-1, on Wednesday. Fans can tune in to see the Boys in Old Glory Red from San Diego on KQCA My58, Estrella TV and ESPN+. 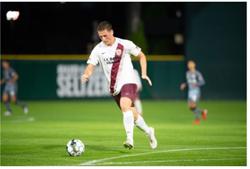 Wednesday’s match up with East Bay rival Oakland Roots SC would close out the season series. Darek Formella bagged his fifth goal of the season while Carlos Saldaña made his second start for the Boys in Old Glory Red since signing with the club on September 15. Formella has created eight chances and completed 80% of his passes for Republic FC in his last three appearances. Roots would open up the scoring early with a 10th minute strike, despite Republic FC dominating the first half. A second half header would seal the game for the hosts, and notch their first victory over Sacramento.

Loyal SC enters Saturday’s Pacific Division match unbeaten in six of their last seven games, and returns to Torero Stadium for the first time since the club’s 1-0 win over Tacoma Defiance on September 19.

San Diego has logged at least 10 shots in 12 of their last 13 contests, falling short of the mark on August 28 with nine against the Indomitable Club at Heart Health Park.

Tumi Moshobane ranks fifth in the Western Conference with 10 goals on the season, while Joshua Yaro has scored twice in his last four games.

Republic FC enters Saturday’s contest with an 0-1-2 record after the two sides split points in San Diego back on July 3 before Loyal SC took all three points at Heart Health Park on August 28. Saturday’s match will mark the third time Republic FC square off with Loyal SC on their home turf, Torero Stadium.

Sacramento held the possession advantage 51-49 in the most recent meeting, but only found the back of the net once.