SACRAMENTO, California (October 11, 2021) – Sacramento Republic FC is back at home to take on LA Galaxy II on Wednesday, October 13. Coming off a tough week at divisional road foes in Oakland and San Diego, the Boys in Old Glory Red are ready to turn their fortunes around against Los Dos to close out the season series. Republic FC will welcome fans to Heart Health Park for the club’s Noche Latina celebration, presented by Mike’s Hard Lemonade Seltzer, featuring performances from Casa De Brazilian Folkloric Arts of Sacramento and a halftime presentation of the El Futuro Scholarship. 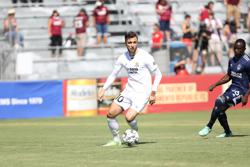 After going ahead in the 30th minute on Darek Formella’s second goal in as many games, San Diego Loyal SC struck twice to steal points from the Indomitable Club at Torero Stadium on Saturday.

Pete Pennanen made his first start for SRFC since August 11, logging three tackles, three interceptions and a chance created. The Finland native led all Republic FC starters with an 84% passing clip for the night.

On Monday, the best fans in the league came through for JuJu Chavez, as the academy product’s 88th-minute golazo in Republic FC’s 3-1 win at Las Vegas Lights on September 5 was named the USL Fans’ Choice Goal of the Month for September. Chavez’s strike was his second professional goal, and the first Goal of the Month honor for Republic FC this season.

LA Galaxy II enters Wednesday’s contest winners of three of their last four matches, including a 3-0 win over first-place Phoenix Rising FC on 9/29. Los Dos’ offense has led to 46 goals on the year, good for eighth across the USL Championship. Since September 11, Galaxy II has recorded four clean sheets while conceding just three times.

Jorge Hernandez has found the back of the net in two of the club’s last three matches, netting the only score in LA’s 1-0 win in Las Vegas on Friday night. The midfielder has created 10 chances in his last four matches.

Republic FC holds an 11-7-6 advantage over their longstanding Pacific Division rivals. SRFC is 1-1-1 against Galaxy II this year, hosting Los Dos just once this year in a September 26 matinee.