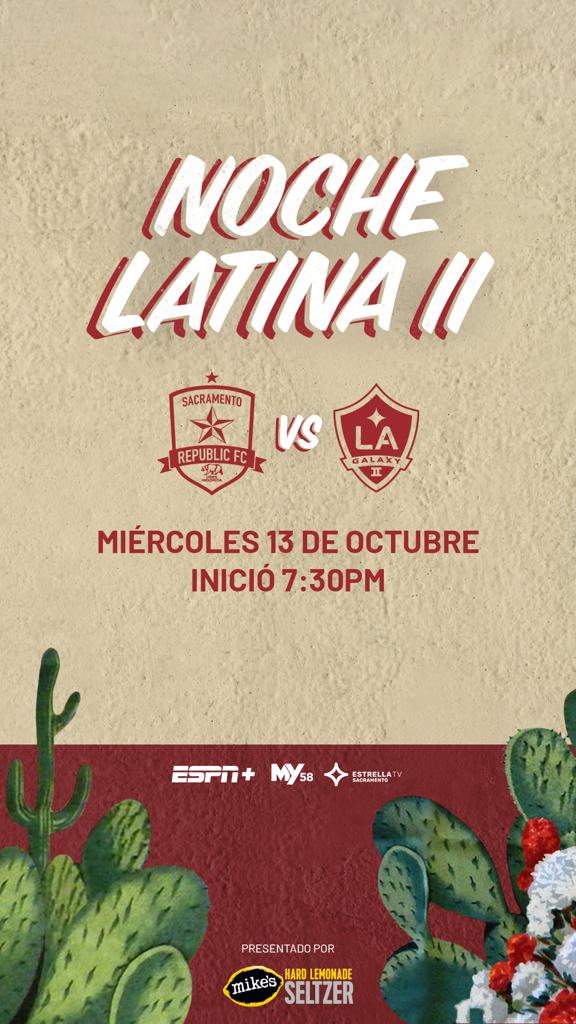 When Republic FC take on LA Galaxy II this Wednesday, the club will celebrate the second Noche Latina of the season to close out Hispanic Heritage Month, presented by Mike’s Hard Lemonade Seltzer. Throughout the match, fans can expect a number of unique celebrations, performances, food, and events meant to celebrate Latinx and Hispanic Culture.

From the time gates open to the final whistle, Bianca Ventura will serve as a guest MC, mastering the game’s happenings in Spanish alongside Connor Sutton.

During the match, a number of special food trucks will scatter the stadium, giving fans a number of unique Hispanic food options to choose from. CA Street Tacos, Paquitas, Conchitas, Yolanda's Tamales, Mexican Street Treats, Fiesta's, and Las Tapatias will all be present serving up some of the best Hispanic food in the region.

Performances from Casa de Brazilian Folkloric Arts of Sacramento will take place in the Fan Zone ahead of kickoff, allowing fans to experience the folkloric Brazilian art of Capoeira- which combines music, philosophy, and self-defense.

In addition, Republic FC will present the second-ever El Futuro Scholarship to two students of Hispanic Heritage from the region at halftime. The Club will also recognize Lydia Ramirez – the Chairwoman of the Sacramento Hispanic Chamber of Commerce – as the honorary “Captain of the Match”.

Kickoff for Wednesday’s contest with LA Galaxy II is set for 7:30 p.m. from Heart Health Park, and the match will be broadcast live on KQCA My58, Estrella TV Sacramento, and ESPN+.