Republic FC battles Pacific Northwest side for final time in 2021

Sacramento Republic FC will play its third game in eight days on Sunday, October 17 when the Boys in Old Glory Red welcome Tacoma Defiance to Heart Health Park for a 2:00 p.m. afternoon kickoff on Youth Soccer Day. This is the fourth and final meeting with the Pacific Northwest side in the midst of a late season gauntlet as the Indomitable Club continues its push for a postseason berth. 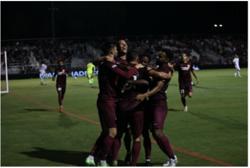 Republic FC salvaged a point at the death with LA Galaxy II on Wednesday night with Darek Formella’s seventh goal of the season in the 87th minute, tying Cam Iwasa for the team lead. Formella has now found the back of the net in three straight games—and four of his last six— and is one shy of tying his 2020 total of eight goals. He has also passed Villyan Bijev on the club’s all-time leading scorers list with 17 goals.

Carlos Saldaña’s six saves against Los Dos were a single-game high for the Indomitable Club’s goalkeeping squad this season.

The draw kept SRFC in the playoff hunt, as they currently sit three points out of the playoff line and are tied with Tacoma on points.

After snapping a seven-game losing streak on Saturday with a 4-1 win over Orange County SC behind a hat trick from Samuel Adineran, Tacoma heads into Sunday following a 1-0 loss to Las Vegas Lights FC.

With four games left, Defiance find themselves a spot behind Republic FC in the standings due to tiebreakers. Three of their four remaining matches are against other teams in the playoff race.

This is the final meeting between the two sides in a four-game series in 2021. SRFC holds a 2-0-1 advantage over Tacoma ahead of Saturday, playing to a draw at Cheney Stadium on August 5 before taking all three points in each of the next two matchups.

Most recently, the Indomitable Club downed visiting Tacoma 3-1 on a night of firsts on October 2. Emil Cuello bagged his first goal and assist in Old Glory Red while Carlos Saldaña recorded his first start and appearance for the club. Luis Felipe earned his fourth USL Team of the Week honor and his second USL Fans’ Choice Goal of the Week honor with his game-sealing golazo in the 77th minute.