Around the Leagues: Playoffs, drama, and goals galore

Late season drama continued in the domestic ranks with more playoff tickets being punched, and the USL Championship’s Pacific Division somehow got wilder. Then the Premier League said, ‘I’ll see your fireworks and raise you 40 goals.’ We saw the ball hit the back of the net a lot in England’s men’s topflight over the weekend, and not without some history being made along the way.

As if the Pacific Division could not be shaken any more, 10-man Oakland Roots SC pulled out a wild 4-3 win in second half stoppage time at San Diego Loyal SC to remain in the playoff conversation and deny Loyal SC second place. A night prior, Orange County SC escaped with a stoppage time win of its own in OCSC’s home regular season finale.

The playoff teams in the Eastern Conference are set, but the seeds are far from. A booming 40-yard strike from Louisville City FC’s Cameron Lancaster in LouCity’s 3-1 win over Memphis has the Englishman riding high on confidence with 20 goals heading into a final week showdown with Birmingham Legion FC. Everything to play for in the Central Division is on the line when the two sides meet in Birmingham on Saturday.

FC Tulsa signed, sealed, and delivered its trip to the postseason on a late equalizer while Pittsburgh’s 2-1 win over Charleston gave the Hounds a clearer shot at overtaking them in the table. 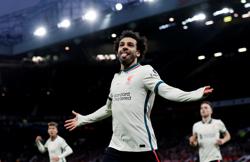 This weekend was goals, goals, and more goals – 40, in fact, the most in a Premier League match week this season – and of course, Jurgen Klopp and Liverpool had a big hand in it.

The Reds’ dominance over the Premier League knows no boundaries. Liverpool embarrassed Manchester United 5-0 over the weekend at Old Trafford, as Mohammed Salah became the highest scoring African player in Premier League history and the first player ever to record a league hat trick at the Theater of Dreams.

Also contributing to an offensive outburst of a weekend, Chelsea made easy work of Norwich City in a 7-0 win that was never in doubt while Watford erased a 2-1 deficit with four goals in the final 20 minutes to humble Everton, 5-2.

Michail Antonio’s strike in the 72nd minute gave West Ham a 1-0 win over Tottenham and more importantly, sole possession of fourth in the Premier League after leapfrogging Spurs.

The Supporters’ Shield was never in question for the New England Revolution, but Sunday’s draw with Orlando City was – enter Adam Buksa. Two goals from the MLS Player of the Week in the final nine minutes gave the Revs a point and the league’s best record for the 2021 regular season.

Sporting Kansas City punched its ticket to the MLS postseason after a 2-1 win over Seattle, meaning one spot remains in the race for home field advantage. Spots four through nine are separated by five points with the Portland Timbers leading the charge in fourth with 46 points despite a 2-0 loss to Colorado.

Meanwhile, playoff seeding in the Eastern Conference is wide open. Philadelphia, NYCFC and the Red Bulls all picked up three points over the weekend to stay in contention for the right to host in the playoffs.

Gotham FC still finds themselves outside the playoff line after a 1-1 draw with Kansas City in the only game of the weekend. Luckily for NJ/NY, another chance at a postseason ticket awaits on Thursday against Racing Louisville FC.

The top half of the playoff bracket is filled out entering the final week of the regular season, but spots three through six are anything but solidified. Chicago, NJ/NY, Houston and North Carolina all remain in contention to extend their seasons.