By the Numbers: Danny Reynolds 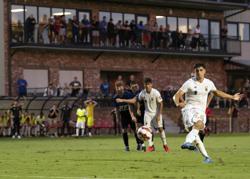 Republic FC’s newest acquisition for the 2022 season, defender Danny Reynolds, has taken quite the journey since entering professional soccer in 2020.

From his time at the collegiate level with Louisville and UNC Wilmington to his 2020 stint with Tacoma Defiance, to even his 2021 NPSL stop, the Brit’s productivity on both ends has continuously impressed. His versatility as a defender and a winger, and his ability to manufacture scoring chances from anywhere on the field makes him a valuable player, one Republic FC is excited to see in action in 2022. As he gets ready for his first campaign with Sacramento, it’s a great time for a glance at some of his career accomplishments and statistics since coming over to the states.

1 player before him selected in the MLS SuperDraft from UNC Wilmington. Upon his selection in 2020, just one other Seahawk had been chosen by an MLS Squad through the draft process – 2016 FC Dallas selection Colin Bonner. Through 2021, just three Seahawks have started their professional careers through the SuperDraft, the other being Reynolds’ former teammate Phillip Goodrum, who went in the third round in 2020 to Atlanta United.

2 assists leading to game-winners for the Lousiville Cardinals in the 2016 NCAA College Cup. Reynolds squad took on two potent sides in the 2016 National Championship tournament, and both times – once against UCLA and once against No. 13 Notre Dame, he delivered to help send his team on to the next round.

4 assists in 2020. Reynolds led Tacoma Defiance in assists during the abbreviated 2020 season, two of which came against Republic FC on July 14 and October 1. The mark was the highest of any defender in the league.

6 goals scored in 2021. Featuring for NPSL side Southern States FC, Reynolds tallied six scores in 17 matches, including a brace on July 10 vs. Jacksonville Armada and an eventual game-winner four days later vs. Pensacola FC. The tally led his club in its first season of play.

13 intercepted passes in 2020. Even in limited minutes, Reynolds was effective on defense, disrupting opposing forwards with regularity. In fact, the number is just one higher than the 12 chances he created on the season, meaning he kept away as many threats defensively as he was responsible for offensively.