Mayor Darrell Steinberg and the ownership group of Sacramento Republic FC Friday unveiled an agreement between the city and the team on the terms of building a new soccer stadium in the downtown Railyards.

SACRAMENTO, Calif. (April 5, 2019) —  Mayor Darrell Steinberg and the ownership group of Sacramento Republic FC Friday unveiled an agreement between the city and the team on the terms of building a new soccer stadium in the downtown Railyards.

The preliminary term sheet for construction of a $252.2-million privately financed stadium in the Railyards will go to the Sacramento City Council for approval on Tuesday. The agreement is contingent on Sacramento Republic FC being awarded a Major League Soccer franchise. 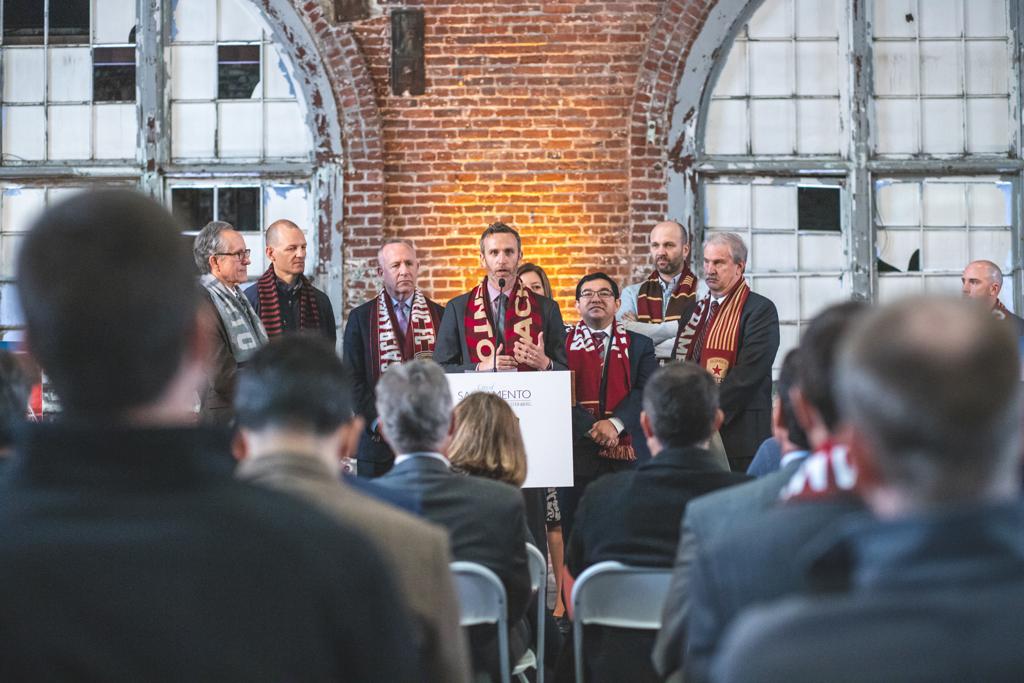 The team owners also have agreed to make donations of cash, time, equipment, tickets and facilities in Sacramento totaling at least $23 million over the term of the agreement. These include holding clinics for at least 1,000 youth in underserved neighborhoods every year, donating 100 tickets per game to local non-profits, building or upgrading public soccer fields and futsal courts every year, and donating $50,000 worth of equipment and gear to 500 kids each year.

“When we look at the costs and benefits for our city in this agreement, the decision to support it is an easy one for me,” Mayor Steinberg said. “We are not writing a check, and the effort is being driven by private dollars.

“This is a major win for Sacramento that will spur long-awaited development of our downtown railyards,” Mayor Steinberg continued. “I’m confident that if we approve this agreement, Sacramento will be the next Major League Soccer city.”

City Councilmember Jeff Harris, whose District 3 includes the Railyards, said “the enormous popularity of the Sacramento Republic FC team, elevated to Major League Soccer, will bring people, energy and assets to the opportunity areas of the Railyards and the River District. The design of the new stadium is fantastic, and it will be a great facility for Sacramento, paid for with private funding.”

The next potential milestone comes later this month, when the MLS Board of Governors meets in Los Angeles.

“We'd like to thank the Mayor, City Council and their teams for putting Sacramento in the best possible place to secure an expansion team that is hopefully announced after the April board meeting of the MLS,” said Burkle. “The owners and the Commissioner’s office have acknowledged that Sacramento is 100 percent ready.  Everyone has worked hard, and we are ready."

The term sheet provides for direct and indirect benefits to offset some of the costs of developing in the railyard and the initial operation of the stadium: