Resiliency and Toughness, Just Two of Gomez’s Many Strengths

While the Indomitable Club’s right back has been recovering from a leg injury, Shannon Gomez’s razor-sharp focus and positive frame of mind has the defender feeling fantastic and dreaming of his debut return upon the restart of the regular season.

Toughness isn’t defined strictly by stature or strength. It’s not defined by a particular amount of weight one can lift or a length of distance one can run. Toughness is about grit, determination, and a ruthless desire to overcome obstacles – no matter how daunting or painful they may be.

Shannon Gomez personifies every sense of the word – tough – and he plays with that tenacious resolve every moment he’s competing in a match.

The speedy fullback whose previously been called-up to the Trinidad and Tobago Men’s National Team isn’t a towering a guy, but he’s the type of defender that lets his tackling do all the talking. And he’ll be the first to tell you, whether it’s the ball or the man, he never lets both get by him while patrolling the back line.

“That's the mindset I always had growing up, a lot of my coaches would tell me is I’m one of the players who is going to refuse to be outworked,” Gomez said. “On the field, it’s either you go, or the ball goes because both of you aren’t going to pass. Pick one because this is what they pay me to do, I can’t let both pass so either I get the man, or I get the ball. That’s just my mindset and I feel like I’ve never strayed away from that.” 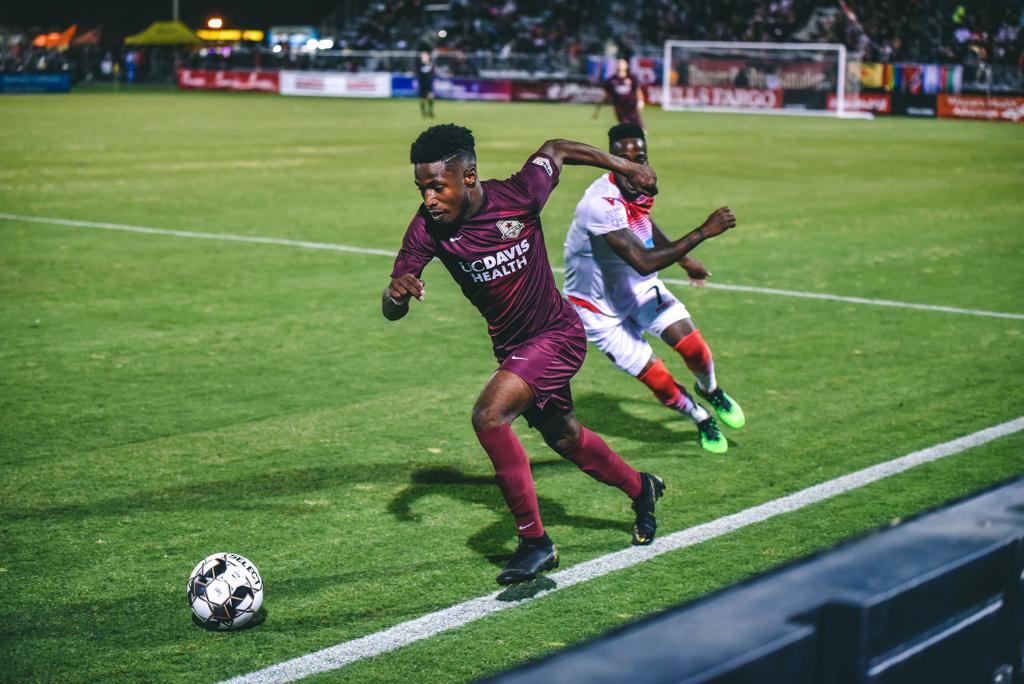 Gomez takes a no-nonsense, business-like approach to his defending. While he’s arguably one of the toughest players in the league, both mentally and physically, he’s unquestionably also one of the most kind and genuine. Gomez is effortlessly cool and smooth, and he carries himself that way on the pitch.

He’s also willing to sacrifice himself for the greater good of the team and give everything he has for the guys alongside him – his own body included.  That means fighting through fatigue or sometimes, even playing through pain.

And a July encounter against Orange County in 2019 was the moment Gomez knew something was wrong.

Midway through the midseason USL Championship regular season fixture against OCSC, as the wing back was manning the flanks as he always does for the boys in Old Glory Red when the injury was first felt.

“I remember the exact moment it happened during the game but I don’t remember feeling like, ‘oh, my ACL is torn,’ but I knew my meniscus might have been torn because I heard a pop,” Gomez said when thinking back on the injury. “It was right around the 33rd minute and I played the whole game, so I didn’t have a lot of problems there.”

He was aware something was off, but his toughness and competitive hunger – both of which are second nature to the Trinidad and Tobago international – kept him out there.

“I finished the game  and then the team [physicians] told me to shut it down because if it’s up to me, I’m playing,” Gomez said. “I was told to get an MRI and the results said I had a torn meniscus and when they went in there it looked like my ACL was torn and it was. They said it could have been torn a long time ago and I could have been playing like that for a long time and who knows, maybe the meniscus tearing triggered that.” 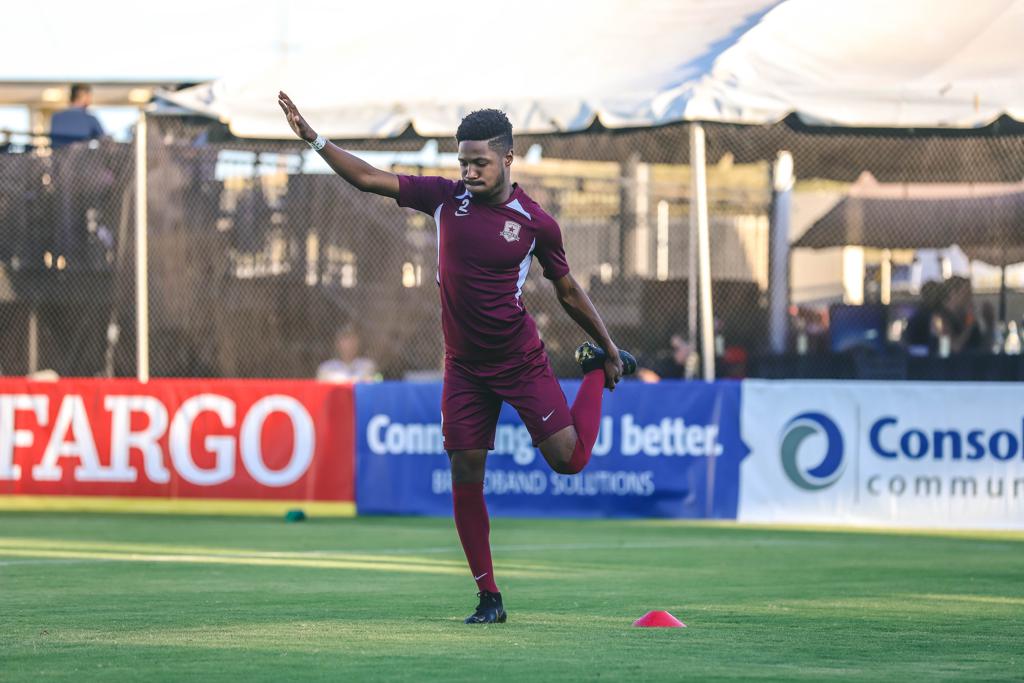 Gomez is a tough guy who fights through pain frequently, and he even did so in this contest by logging every second of the 90-minute match. But the medical results indicated this time around it was going to be some time before the supporters of the boys in Old Glory Red would see the fullback on the flanks again.

Luckily for Gomez, a team of incredible doctors, trainers and physicians were in his corner helping him in the rehabilitation process every step of the way. All of the operations were done successfully by UC Davis Health team physician Dr. Cassandra A. Lee M.D. and the Indomitable Club’s team of physios Luke Rayfield, Katy Norton and trainer Betty Olmedo have also played the role of hero in helping Gomez get back to full health.

“You just want to do everything fast and it helps having our physios like Betty and Katy and Luke, they’re amazing and they’re in touch with what the best plan is for me, so they really take care of me,” Gomez explained. “When you have people like Katy around you, Katy’s not just a physio, she’s an inspiration. Katy’s always pushing you and finding the small victories like ‘oh, you got two or three more degrees today, that’s amazing’. Just being around someone that’s just that positive and pushing you every day is someone you need, and you need people like Katy and Luke around you.”

Gomez is grateful for having each and every member of the medical staff guiding him towards being game ready, and he needs them to remind him that the recovery process isn’t a sprint, it’s a marathon.

“Some days I’ll be talking crazy like I’m ready to do some long balls and clearances and cut hard in the box or tackle somebody and they’ll be like ‘woah, hold on buddy, not yet, it’s coming, just wait’ even though I’m ready to test it,” Gomez joked. “I feel good, but I don’t want to push it too hard. I feel like I can, but they say that’s the moment when you have to hold it back a little bit.” 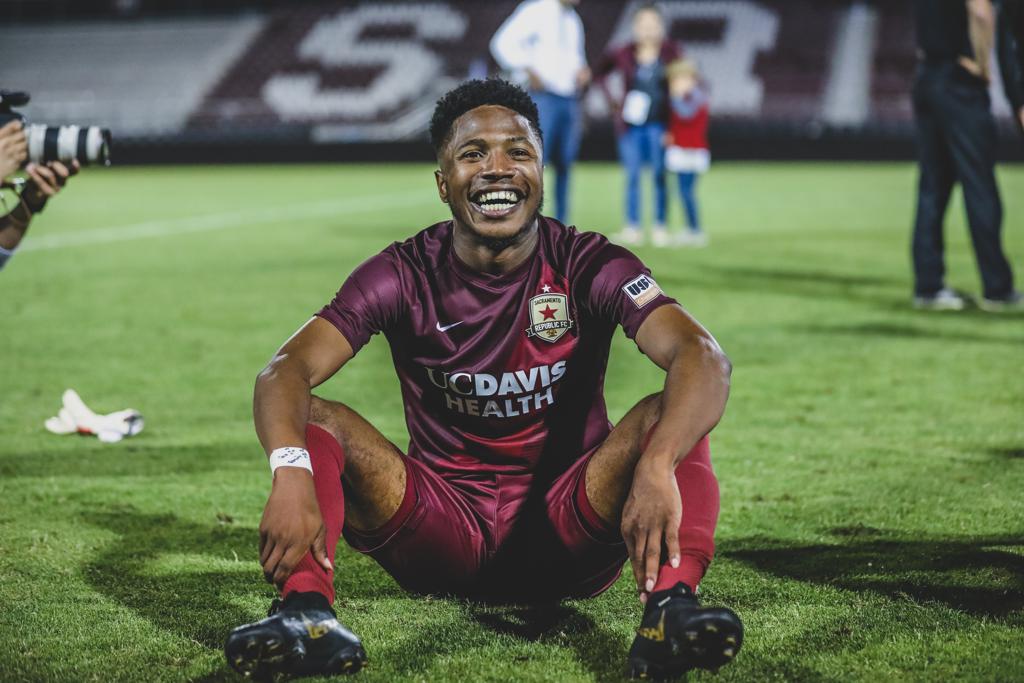 And of all current members of the Indomitable Club, Gomez would know.

Given Gomez had once before endured a recovery process lasting longer than a few weeks, he knew exactly what it was going to take to do it again. He maintained his Zen-like focus, did everything possible to prevent himself from losing his positivity like reading scriptures his mother would relay to him, and taking a slow approach despite an endless desire to want to return to the pitch as quickly as possible.

“Hard work is embedded in me, that’s all I ever knew coming from the Caribbean, I had to work hard for everything so that part [of the recovery process] I wasn’t worried about,” the right back said. “The part I was worried about was when I was going to be back, I want to be able to contribute too. I wanted to rush it and I wanted to get back, but I also knew this was not my first rodeo, I knew what to expect. But the twists and turns kind of caught me off guard, one of the things you tried to do today failed.”

Staying motivated is something that might be easier said than done. For Gomez, it was the toughest challenge of all.

“It’s the hardest part,” he said. “Mentally, you want to be strong. When you let negativity step in, even if you doubt yourself just one time, that’s when you lose focus on what you’re really working towards. But for me, I know what I want for myself, I know there isn’t anybody that’s going to do it for me. People will tell you, ‘oh, speedy recovery’, which is nice, but if you don’t work for it, it’s never going to come.” 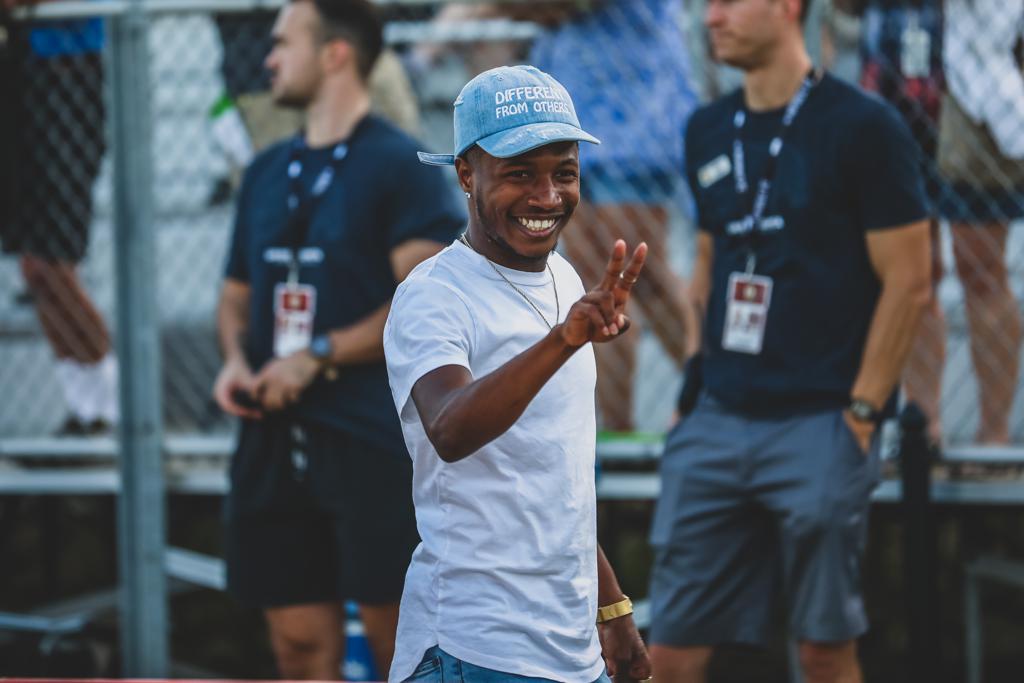 Months went by without kicking a soccer ball and Gomez kept working. He was seeing and experiencing a tremendous amount of progress, but every now and then the fullback would find a small setback.

“In my recovery, I’ve had some ups and downs, I’ve had some problems with it, the knee not really doing what you want it to do,” he said. “But then I hit this very steady incline where everything was right, my knee was bending, I started doing things I couldn’t do before and now I’m closer to the last phase and I’m seeing the light at the end of the tunnel.”

Hope began to set in. The tough defender was feeling like he was getting closer to closer to returning to his passion, and to say he’ll be grateful for that moment will be a tremendous understatement.

“I will never take for granted just being on the field for one minute,” Gomez said. “The day when I step out onto the field, which is soon, and thank God for that, I’m going to put on that number two and that badge for Sacramento, I’ll know that I’m able to overcome and fight through difficulties and hopefully I’ll be an inspiration to somebody else.”