Sacramento, Calif. –  Today, Sacramento Republic FC announced the 2021 United Soccer League (USL) Championship regular-season schedule, presented by UC Davis Health. The 2021 campaign will kick off on the road for the Indomitable Club when the squad travels to Southern California on April 30 to clash with LA Galaxy II. The six-month regular season features 32 fixtures – 16 in Sacramento – beginning late April and concluding on Saturday, October 30 at home against San Diego Loyal SC.

County Health Officials have approved the club’s plan to bring fans back on matchdays, beginning with the club’s friendly exhibition against Real Monarch on April 24. Over 2,300 fans will be allowed in the stands while Sacramento County remains in the red tier. Plans to safely expand capacity when Sacramento County moves into the orange tier are in progress, with early reports indicating the county could meet the threshold by late April. 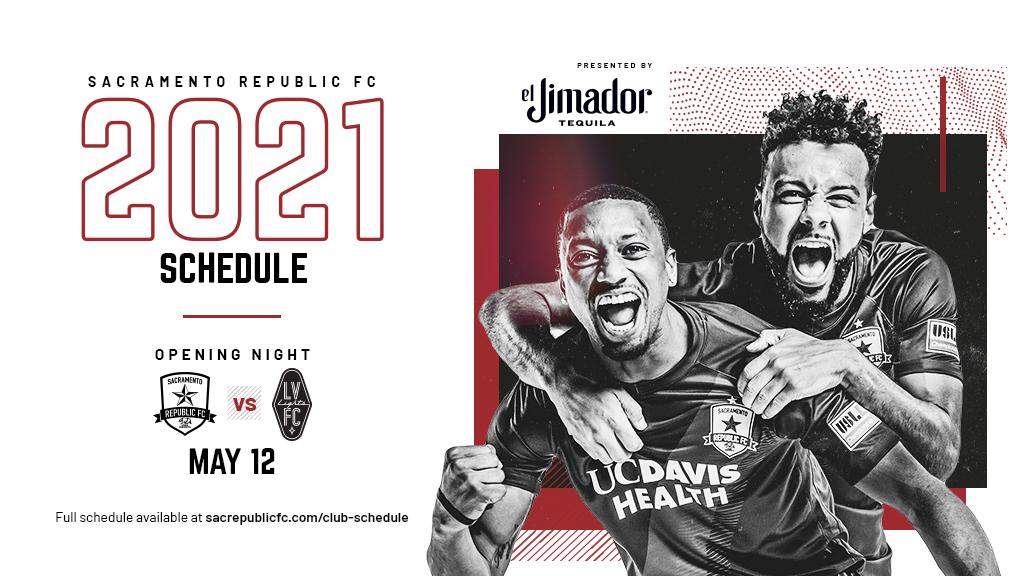 Members will have access to an exclusive presale beginning on April 7 to begin selecting matches during the 2021 season. The club will also open a waitlist for single match tickets – based on availability after member presales. Fans can still join and get priority access to tickets during the 2021 campaign by signing up at SacRepublicFC.com/BecomeAMember. Fans interested in single match tickets can sign up for the waitlist at SacRepublicFC.com/single-game-tickets.

Hearst Television’s KQCA My58 and Estrella TV will continue their partnership with the club for a fourth year to broadcast 25 matches throughout the season. Fifteen home and ten away matches will air live,beginning with Republic FC’s season opener on April 30 at LA Galaxy II. Play-by-play announcer Rob McAllister and Color Commentator Kevin Goldthwaite are returning for their eighth consecutive season. Former Republic FC Midfielder Adam Moffat returns for his second season on the broadcast team, rotating the color commentator duties with Goldthwaite for select matches on KQCA My58.

Armando Botello and Milton Moreno return to the Estrella TV Sacramento booth, and will be joined by color commentator Sal Acevedo. Viewers in the greater Sacramento/Stockton/Modesto area will be able to watch game broadcasts in Spanish via Estrella TV Sacramento on digital channel 58.3, Xfinity 377, Charter 200, Consolidate Communications 16, Rancho Murieta 179 and Volcano Vision 447. Through a USL Championship partnership, all 32 Republic FC regular-season matches will be simulcast on the ESPN+ platform, available on desktop, mobile devices and other streaming devices.

Additional notable home matches include 2020 Western Conference Rising FC visiting the Indomitable City on Saturday, May 29 – Republic FC’s second home game of the season – and again on Saturday, June 26. The local derby against USL newcomers Oakland Roots SC will officially begin on Wednesday, June 2 when the East Bay club visit Sacramento for the first-ever USL Championship showdown between the two Northern California sides. The boys in Old Glory Red will then travel to Oakland on Saturday, June 19 for what will be Roots’ first-ever home game in the USL.

Republic FC will play four non-divisional opponents, including an Eastern Conference matchup against New York Red Bulls II. The match between RBII and Republic FC will be the first-ever meeting between the two clubs and will take place on Saturday, July 31 in Sacramento. The Indomitable Club’s additional three non-divisional matchups include a visit to Real Monarchs on June 9, a trip to El Paso Locomotive FC on September 11 and playing host to San Antonio FC on September 18.

The boys in Old Glory Red conclude the regular season at home on October 30 against San Diego Loyal SC.

This season, Sacramento will have two three-game homestands. At the end of May through June 5, the Indomitable Club will host Phoenix, Oakland and Orange County SC. From September 18 to October 2, Republic FC will match up against San Antonio, LA Galaxy II and Tacoma Defiance. The Boys in Old Glory Red will take to the road for the longest road trip of the season from September 1 to September 11 for a three-match expedition against LA Galaxy II, Las Vegas and El Paso.

The full Republic FC game and broadcast schedule is available online at SacRepublicFC.com/club-schedule.