USL 2017 Coach of the Year will lead Republic’s USL team after serving as the U-19 coach and Academy Director.

Sacramento, Calif. – Today, Sacramento Republic FC announced Mark Briggs will serve as the club’s next head coach effective immediately, continuing the team’s preparation for the 2020 USL Championship season. The terms of the two-year agreement were not disclosed. The club’s extensive search examined top-tier candidates with experience across a wide array of professional soccer. 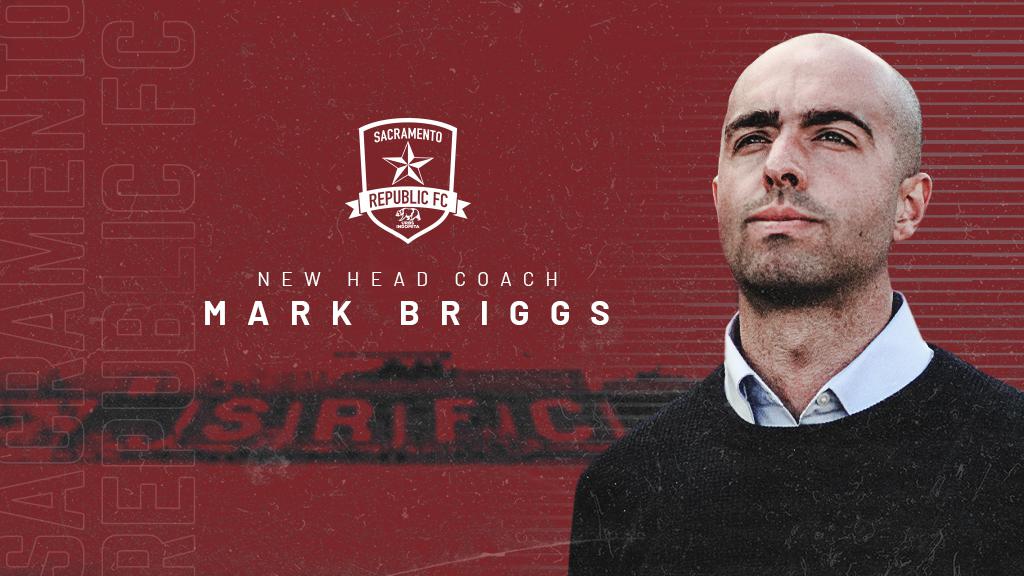 “Mark is an exceptional leader, a proven winner, and is passionate about player development,” said Sacramento Republic FC General Manager Todd Dunivant. “He has excelled as our Academy Director, and his forward-thinking approach is the right fit as we compete for silverware and develop talent for our club.”

The USL 2017 Coach of the Year joined Republic FC as an advisor for the club’s academy earlier this year, eventually rising to the role of academy director in August. A search for a new director will begin immediately, as the club continues to prepare and develop its local talent.  Republic FC’s academy enters its fifth season, the first-ever club with a full development academy before joining Major League Soccer (MLS).

“It is truly an exciting time for football in Sacramento and I’m thankful for the opportunity to grow with Republic FC in this new role,” said Briggs. “From my first days supporting the academy to this new role guiding the first team players, the passion and values that drive this club will help us find success and build a strong foundation for years to come.”

Mark’s experience as a player, leader, and coach – across his career and levels of professional football – will add a wealth of knowledge to support Republic FC’s 2020 campaign, as well as the club’s continued development in preparation for its inaugural season in Major League Soccer.

Briggs led Real Monarchs during the club’s impressive turnaround campaign. During the 2017 USL Championship season, Real Monarchs climbed from 11th on the previous season’s table to first place in the western conference, earning the regular season Supporters Shield. For the dramatic turnaround, Mark was honored as the USL Coach of the Year after delivering Monarchs its first-ever trophy and playoff berth in club history.

During the record-breaking 2017 campaign, Monarchs started the season with just a single loss over 14 games, establishing a new mark for consecutive wins. The well-rounded club collected 11 clean sheets, only conceded three or more goals once in league play, as well as scoring in its first fourteen matches – only held scoreless in five matches (2 draws.) Briggs guided his team to within two wins of the all-time USL record season record, set by Red Bulls II, later to be broken by Western Conference opponent Phoenix Rising FC in 2019.

Born in Wolverhampton, England, he signed his first professional contract at age 17 as a product of the West Bromwich Albion youth system. In 1999, he captained the Baggies youth squad to a cup victory at Wembley Stadium and earned the club’s honor as Youth Team Player of the Year.

As a professional, Mark represented West Brom’s first team with 12 appearances, beginning in 2000, as well as 150 additional reserve team appearances. A transfer sent Mark to Denmark’s Herfølge, where he contributed to a first division championship, resulting in the club’s promotion. Following his time in Denmark, he returned to English football, contributing to the success of League One and Northern League clubs. In 2008, Mark began his US playing career play for USL side Kalamazoo Outrage. In 2009, he joined Wilmington Hammerheads where he was awarded with the team’s Player of the Year honor, for his efforts during the 2009 USL Second Division regular season title campaign.

When he rejoined Wilmington for a second time in 2012, Mark continued his contributions on the pitch, but also began his coaching career as a player-coach. He remained an assistant coach with the North Carolina club until 2015 when he was appointed head coach of Wilmington. His time in Wilmington includes: the development and transfer of a player to a Bundesliga 2 team, signing the first former English Premier League (EPL) player to a USL contract, creating a reserve team for young player development, establishing a formal EPL partnership to groom talent. Mark’s incredible success in Wilmington includes advancing to the fourth round of the 2016 US Open Cup, and a thrilling draw with MLS side Real Salt Lake – only to end in a penalty shootout loss.

Republic FC will host open tryouts January 18-19,2020, providing an opportunity for players pursuing a professional contract to be evaluated by the team’s staff. At least one player in attendance will be invited to train with the team ahead of the 2020 USL Championship season with the chance to earn a professional contract. The club’s training camp will follow open tryouts and lead into a preseason schedule featuring MLS, USL, NASL, PDL and NCAA opponents.