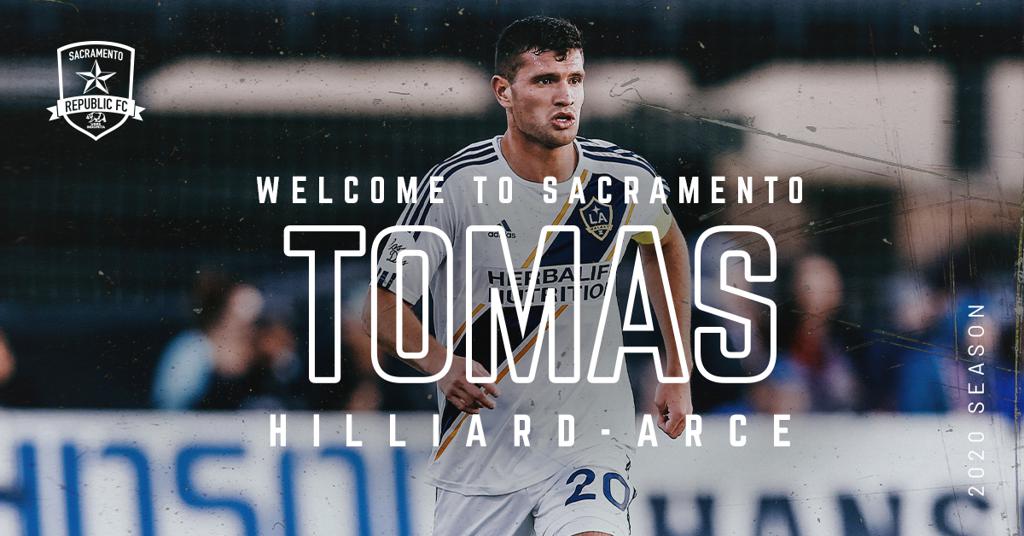 The second overall pick in the 2018 MLS SuperDraft by the LA Galaxy made five Major League Soccer regular season appearances, four as starts for the Southern Californian club.

Hilliard-Arce played four years at Stanford, 2014-2017, leading the Cardinal to three consecutive NCAA national championships. In each of his last two years in Palo Alto, the center back was selected First Team All PAC-12 and PAC-12 Defensive Player of the Year. He was also a Missouri Athletic Club Hermann Trophy finalist his senior year, an award given to the nation’s top male and female soccer players.

“Tomas is a tremendous center back with a commanding presence that will give our back line a massive boost,” said Republic FC General Manager Todd Dunivant. “He is a proven winner that takes real pride in the defensive side of his game and is a valuable asset on both attacking and defending set pieces. We are delighted to welcome Tomas to Sacramento.”

Last season, Tomas spent the majority of 2019 with USL’s LA Galaxy II where he made 26 appearances, all as starts, and added three goals. The Los Dos defender led his team in clearances (127), blocks (23), and interceptions (56). Hilliard-Arce did log 90 minutes for the MLS-side during a Lamar Hunt U.S. Open Round of 16 loss to Portland Timbers and come on as a substitute during LA’s Quarterfinal win over Club Tijuana in Leagues Cup competition. He was also named to the USL Championship Team of the Week twice.

In his 2018 rookie campaign, Hilliard-Arce made 14 appearances (all starts) for LA Galaxy II and finding the back of the net once. He finished the season second on the team in clearances (80) and blocks (16).

As a Cardinal, Hilliard-Arce made 87 career appearances, scored 13 goals and tallied five assists. He also played alongside current Republic FC midfielders Drew Skundrich and Sam Werner during his time at Stanford. As a freshman, he was named to the All-Far West Region Third Team as well as being selected to Top Drawer Soccer’s Best XI. In 2016, he was picked to the College Cup All-Tournament Team and the following season he was recognized as the 2017 College Cup Most Outstanding Defensive Player.

The standout defender who was born in Hartford, CT, but grew up in Matthews, NC, has only accumulated eight yellow cards in 48 professional matches across all competitions, just one caution every six games. He also rarely turns the ball over in his defensive half of the field, given Hilliard-Arce has a successful passing percentage in USL play of 87.8% in 2018 and 90.6% in 2019.