Republic FC kicked off its preseason training camp tour on Wednesday morning with a trip to the Pacific Northwest to square up against the reigning Major League Soccer champions, Seattle Sounders FC.

The business trip, which ultimately was a 120-minute closed-door scrimmage, allowed the boys in Old Glory Red to play against championship competition and test their current fitness levels.

Everybody who traveled got to play 60 minutes, including the top crop from the Republic FC Academy system. The ultimate takeaway from the match was far from the final score line, rather, it was recording valuable minutes against some of the best in the game.

“It was great for us as an organization to be able to take Rafa who is 15-years-old, Aris Yang, Julian Chavez, Diego Ramos, and Hayden Sargis, who's part of the first team now, up to play Seattle’s best eleven,” Republic FC Head Coach Mark Briggs said. “It’s a great experience for them because they’re going to be utilized this season.” 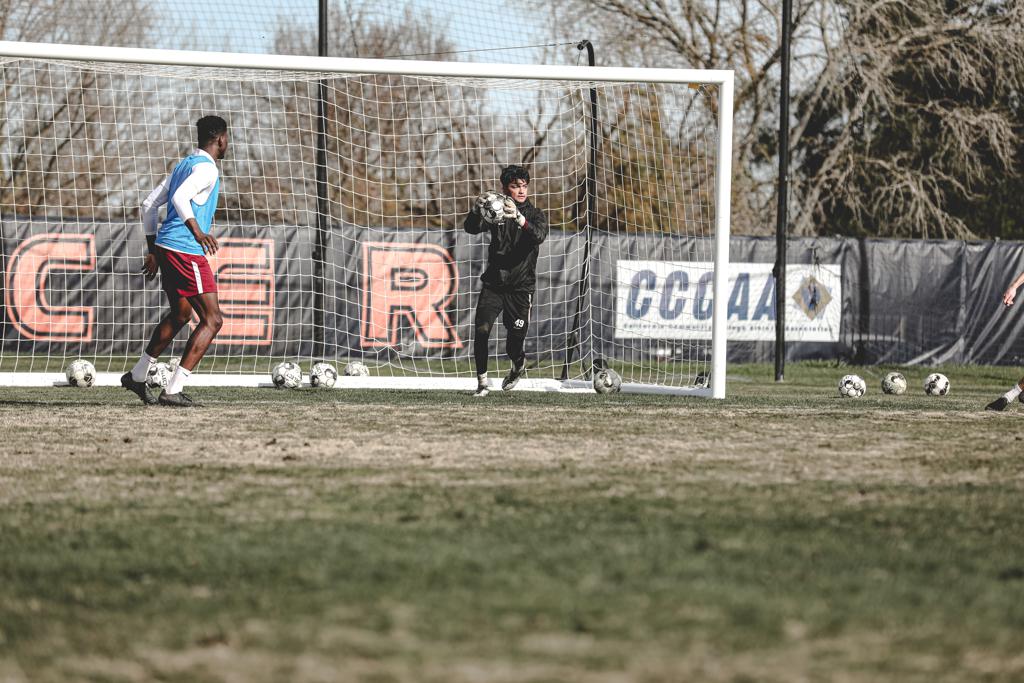 Against the league’s top club, the academy stars did everything but shy away from the competition. Notably, goalkeeper Diego Ramos who had a tall task ahead of him of having to man the net against countless lethal attacking threats in Seattle’s offensive arsenal. But the shot stopper played strong and left a positive impression on the boss.

“Diego’s got a lot of potential and he’s still a young boy,” Coach Briggs said. “I think a lot of those youngsters when you line up and you’ve got Ruidiaz, you’ve got Jordan Morris, you’ve got international stars and big MLS players that you’re going up against, it can be a little intimidating but you’ve got to get on with that and get over that. It’s been great for their development.”

Defensively, Sargis and Yang were the young talents that were assigned the tasks of having to handle the likes of Morris and Ruidiaz. And the boys didn’t back down.

“Aris played right back and played directly up against Jordan Morris,” Coach Briggs said. “He’s used to be on the field playing U-19’s but he’s been doing well at the U-19 level and when you do well, you get the opportunity to move up. His opportunity has come up and he’s grabbing it with both hands.” 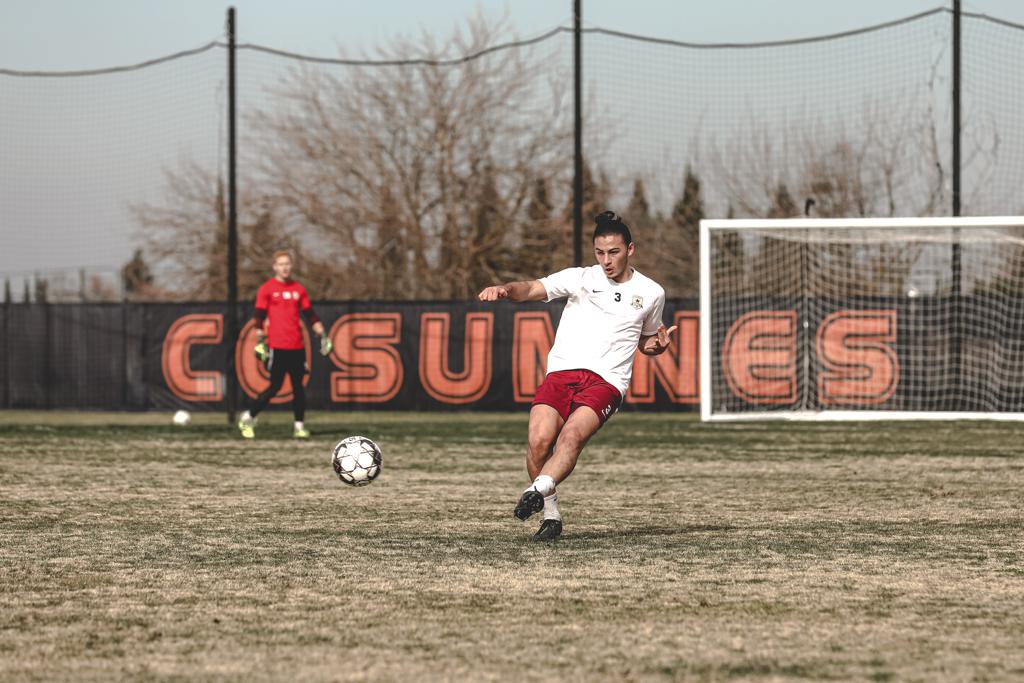 Defender Hayden Sargis during the first week of training camp.

The reliable Sargis played more centrally along the backline and wasn’t at all intimidated by an opposing offensive unit that scored the fifth-most goals in MLS’s Western Conference last season.

“Hayden did well and Hayden’s a first team player so the standards are a little different for him but we have to make sure we’re managing him and he’s developing on the path that we project him to be,” Coach Briggs said following Friday’s training session.

In the midfield, Chavez was handed his first team opportunity right from the get-go and had to face Seattle’s strongest lineup for the entirety of his time on the pitch.

“Julian is someone I feel is going to be huge, he can do special things with the ball and has a sweet left foot,” Coach Briggs said. “I like JuJu’s attitude; he’s got that chip on his shoulder and he fights for everything. He’s a Sacramento boy and it means the world for him to represent Sacramento, which I think is important when you have the opportunity to play for your hometown team. That’s something special, and hopefully he can get that opportunity in the coming season.” 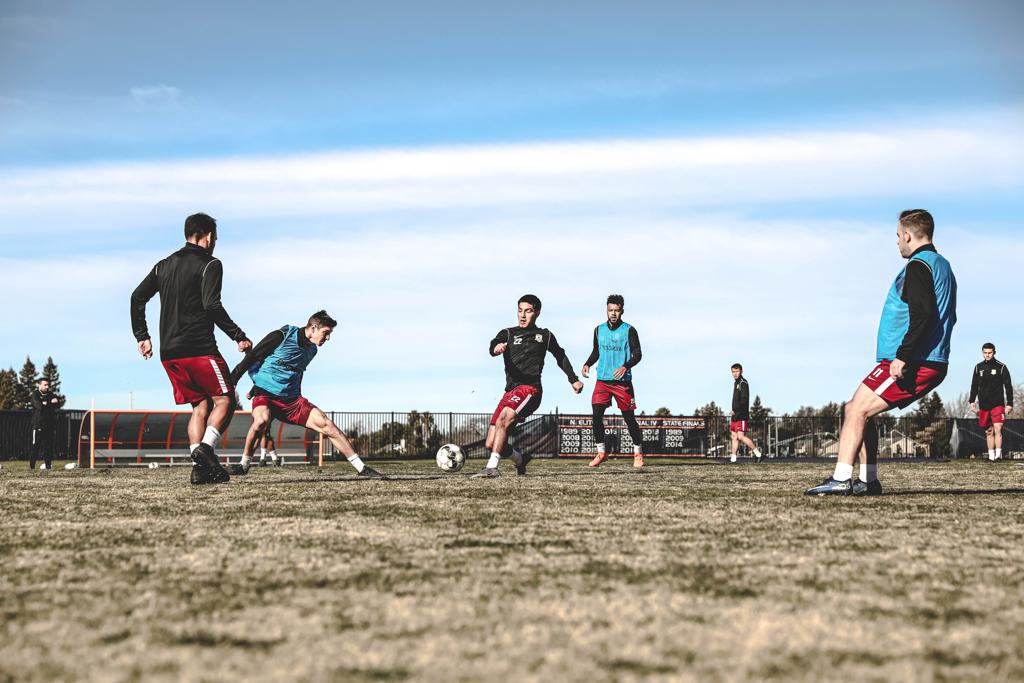 Midfielder Julian Chavez (#22) in the middle of a training camp drill with the SRFC first team.

Last but certainly not least, is the impressive young gun Rafael Jauregui who as mentioned early, is only 15 years of age.

“Rafa is somebody that has bucket loads of potential,” Coach Briggs said. “He has a natural ability which is why we included last year against FC Juarez. One of the joys of being a football coach is being able to offer him that first team opportunity and his reaction when I told him he was playing was absolutely priceless. But he went up there and didn’t look out of place, so we just need to keep pushing, keep developing and keep providing opportunities.”