Today, Sacramento Republic FC announced that the club has reached an agreement with midfielder Matt LaGrassa, pending league and federation approval. Per club policy, the terms of the contract were not disclosed.

“We are delighted to bring Matt back home to Sacramento. He embodies what this city and this club is all about,” said Republic FC President and General Manager Todd Dunivant. “He is another example of the top tier talent developed out of our region, and the team will benefit from his experience and leadership.” 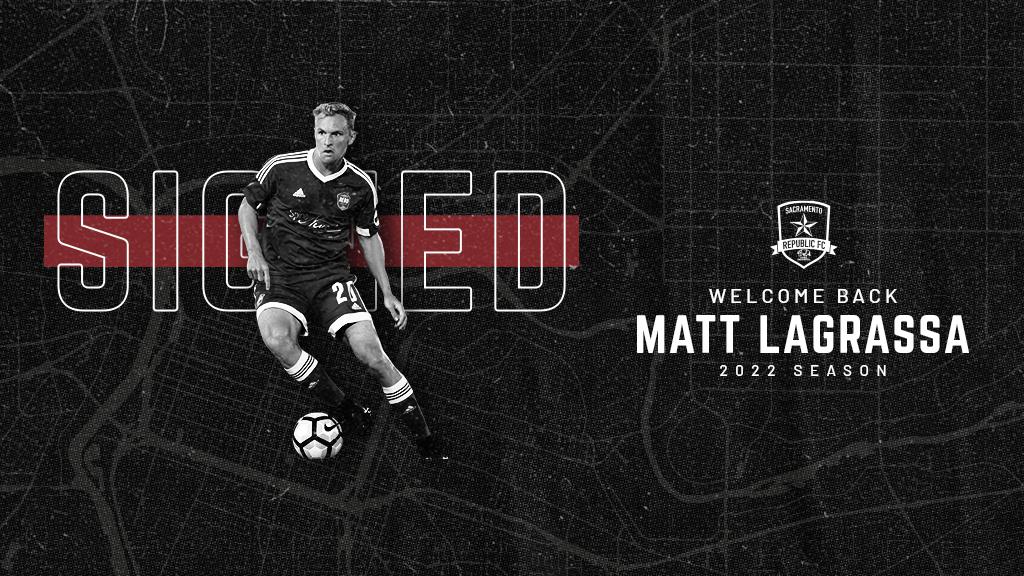 LaGrassa joins Republic FC following four seasons with Nashville SC – two with the USL Championship side and two with the MLS side. In 2018, as Nashville prepared to begin USL Championship play, he was one of the club’s first signings. Through two seasons, he made 71 appearances, tallying six goals and four assists – helping the team reach the Eastern Conference Semifinals. In 2020, Matt was one of just four of Nashville’s USL players who were signed to MLS contracts. Over two seasons, he maintained an 83% passing accuracy and created 15 scoring opportunities in 21 appearances, including a trip to the 2021 Eastern Conference Semifinals.

The Elk Grove, CA native began his professional career with his hometown club in 2016. He spent a majority of his rookie season in Sacramento, where he scored his first professional goal and logged 13 appearances, with two assists. In 2017, LaGrassa joined Reno 1868 FC and paired in the midfield with current teammate Luis Felipe. In his lone season in Reno, he logged 32 starts in 33 appearances, tallied a goal and three assists, and helped the team finish third in regular-season Western Conference play. Before logging his first professional minutes, Matt competed for USL Premier Development League sides Des Moines Menace (2012) and Ventura County Fusion (2013-15.)

LaGrassa is a graduate of Pleasant Grove High School (Elk Grove), where he earned All-Metro League honors after posting 26 goals and 10 assists in his senior season. During his junior and sophomore seasons, Matt led the Eagles in goals and assists, earning him an All-Delta Valley league recognition. While playing with local organization San Juan Soccer Club, he was selected to participate in Cal North’s Olympic Development Program three times.

At the collegiate level, he played for Cal Poly San Luis Obispo where he scored 18 goals and added eight assists in 77 career appearances. He remains in the top 10 for all-time points (44), goals, and appearances for the Mustangs. In addition to three All-Big West Conference Team honors, he was awarded the Big-West Conference Offensive Player of the Year (2015) and named to Top Drawer Soccer’s National Team of the Week (September 2017).

The full 2022 regular season schedule is out! Download it at SacRepublicFC.com/Club-Schedule.