Republic FC returns to action Wednesday, hitting the road for the second time in three matches for a match against El Paso Locomotive FC. It’s a big contest – El Paso is the first team Sacramento will meet for a second time this season, and the Texas club has turned their season around after a slow start. Sacramento will look to make it two in a row over Locomotive, while the hosts are looking to avenge their opening night defeat at the death.

To get a win, Republic FC will need to keep going their string of excellent performances. Since April 30, the club’s allowed just one goal, tallied three consecutive shutouts, and showed patience in the attacking third. They’ve done well in every aspect, and to beat a quality team like El Paso Mark Briggs Men knows that they need to keep it up.

“It’s going to take another complete performance,” said Briggs Monday, “We’ve got to be solid defensively, and trust ourselves from an attacking standpoint.”

Solid defense is what’s allowed the club to enter this match unbeaten since April 23; last week, Sacramento shifted its defensive formation with  immediate results. Since, they’ve held New Mexico United, New York Red Bulls II, and Phoenix Rising FC – all excellent offensive teams – scoreless in the midst of a four-in-twelve day stretch. Fundamentally, every player is executing well and it’s clearly had a ripple effect on their results. 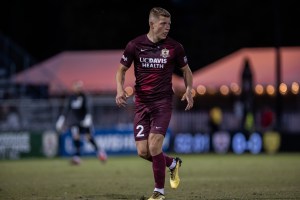 “We’re hard to break down, people are in the right areas and doing the right thing,” Briggs continued. “Individually, we’re defending properly, which makes the collective [effort] stronger.”

“We want to try to get [a clean sheet] every single game, and see how long we can keep our streak going,” said defender Jack Gurr. “We changed our system and I think it’s made us a lot more secure.”

Even though they’ve already bested the team they’ll line up against Wednesday, the club knows they can’t take them lightly. While Locomotive FC took a tough defeat last week to Pittsburgh, they entered that match on a three-game win streak and as one of the most productive offensive squads in the entire league. To beat an opponent of their caliber Sacramento will have to be at their best, and have prepared as such in each of their sessions this week.

“They’re probably one of the best teams we’ve played against,” Gurr continued. “We played them early, and they’ve picked up some good results recently. We’ll need to be ready for what they have.”

“[We’ve been] touching up on our identity, our style,” Briggs continued. “There’s a few tactical situations we felt weren’t as good as they can be, because we haven’t had a chance to work on them. “I feel like we’ve improved and it’s been a good week.”