Sacramento, Calif. – Earlier today, the Black Players Alliance (BPA) of the USL announced a special partnership with Bootbags that launched three custom bags to celebrate Juneteeth and support the work of five organizations in five different USL cities. Republic FC Defender Duke Lacroix helped bring the initiative to life and collaborated with Hugh Roberts of Monterey Bay FC on one of the three designs.  Amadou Dia (Louisville City FC), Zach Herivaux (Birmingham Legion) and former Republic FC midfielder Andrew Wheeler-Omiunu (Forward Madison FC) each worked with designers as part of the launch. The bags are available for pre-order through Bootbag’s website – as well as the individual team stores. Duke and Hugh’s bag is available at for pre-order at Shop.SacRepublicFC.com. Each player will also have their bag during Saturday’s matches in advance of Juneteenth, Sunday June 19.

“Juneteenth is a holiday of celebration; a celebration of freedom within the black community. It is important to take this day to understand our history as a nation,” said Republic FC Defender Duke Lacroix. “I hope these bags reflect a communal celebration of Juneteenth with fans, players, and the organizations that helped create them together. The bags are a creative expression that can hopefully produce tangible results in underserved communities at a national and local level.” 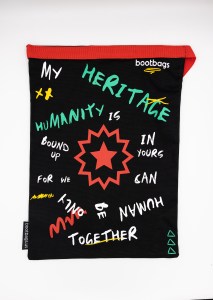 The design of the Duke and Hugh’s bag in the collection draws inspiration from the Juneteenth flag. At the center is an outlined star. A quote from South African Anglican Archbishop Desmond Tutu is featured in a handwritten font to feel more personal with ‘humanity’, ‘heritage’, and ‘together’ are highlighted to indicate their importance. On the back of the bag is the number 19, and 19 stripes to connect with June 19th 1865 – the reading of General Order No.3 – the origins of Juneteenth.

In partnership with the Black Players Alliance of the USL, Republic FC will feature Duke and Hugh’s bag on its team site and help contribute to the projects with proceeds from the sale. Fifty percent of the proceeds from each bag sold will be donated to the men’s soccer program at Fisk University, a Historically Black College & University (HBCU). Twenty-five percent will be donated to a local charity or non-profit in each club’s market where the bags are sold. Republic FC and Duke will work together to identify a local project that aligns with the goals of the BPA. The remaining twenty-five percent of proceeds will be directed to the BPA to help fund future initiatives.

Read the full BPA release about the Bootbag collection

Learn more about the design of the bags and their importance

In addition to supporting the Bootbag collection, Republic FC is partnering with Black Players for Change, the Black Women’s Players Collective, U.S. Soccer Foundation, as well as local non-profits including The Center for Fathers and Families and Mutual Assistance Network to host a Juneteenth Festival and Father’s Day celebration on Sunday at the Del Paso Sports Complex.

Sunday’s celebration is free and open to the public, with special invites from youth and families involved with the Mutual Assistance Network and the Center for Fathers and Families. The festivities will be centered around Juneteenth inspired BBQ menu from Low Slow Rowe, provided by Black Players for Change, as well as an opportunity to enjoy the recently opened futsal courts. Republic FC’s Duke Lacroix – a member of the USL Black Player Alliance, BPC Founder & Executive Director Quincy Amarikwa, Jeremy Ebobisse of the San Jose Earthquakes and local soccer standout Amobi Okugo will join the celebration for free futsal clinics and hop into the pick-up games on the four new courts.

After a two-year revitalization project, the Del Paso Heights Sports Complex unveiled four new futsal courts on site that sat dormant for decades. The new facility has already begun to help energize and activate one of the region’s underserved neighborhoods. Not only will the futsal courts help promote health and wellness through soccer and provide a safe place to play, the complex will create economic development opportunities for local businesses in the surrounding neighborhood.