SACRAMENTO, Calif.  — Sacramento Republic FC announced today it has reached an agreement with midfielder and club legend Rodrigo ‘RoRo’ Lopez to return to the club following his time in Mexico’s top leagues. The terms of the new deal were not disclosed. 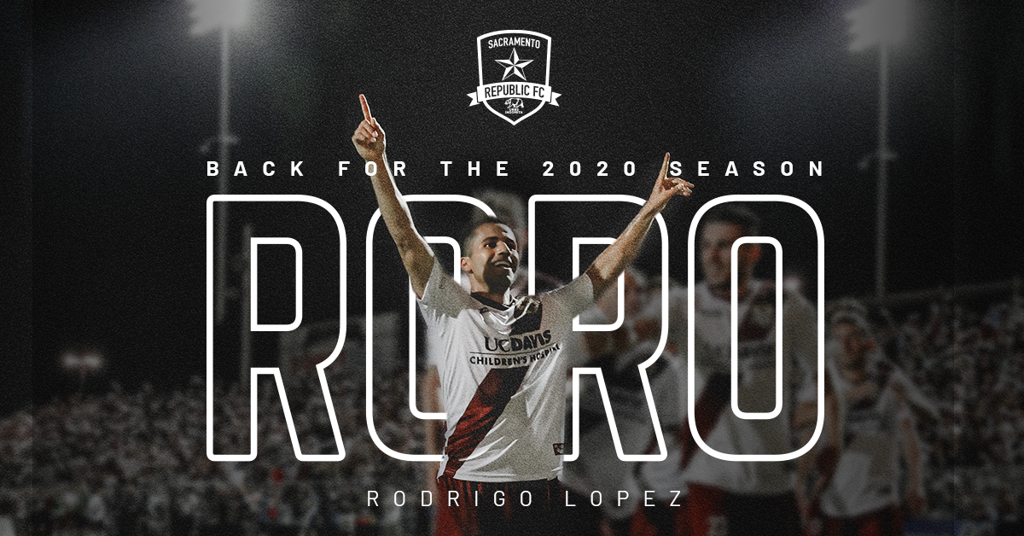 The Guadalajara, Mexico, native was Republic FC’s first-ever signing in 2013. RoRo, who grew up in Santa Barbara, CA, is currently third in club history with 13 assists in league play (19 in all competitions over two seasons) and his 20 goals in USL action hold the second-best slot on the club’s leaderboard.

“RoRo means so much to this city and to this club, and it’s an absolute pleasure to have him back in Sacramento,” said Republic FC General Manager Todd Dunivant. “He brings versatility to our midfield, quality on set pieces, and valuable leadership both on the field and in the locker room. We’re expecting his second stint at the club to even top his first.”

Lopez was essential to one of Republic FC’s most memorable matches in club history, the Miracle at Bonney. Trailing by two goals against bitter rivals LA Galaxy II during the 2014 USL Semifinal Playoff showdown in Sacramento, Lopez lead the Indomitable Club to the USL Cup Final with three stunning second-half strikes.

“Sacramento has always held a special place in my heart,” club legend Rodrigo Lopez said. “I’m excited to return to Republic FC and contribute on the field as we chase another championship for the city. Raising a cup for the club in its inaugural season was an honor and I look forward to building on that milestone.”

In 2016, Lopez departed the USL to play in Mexico’s top divisions. He joined Celaya FC in Mexico’s Ascenso MX during the 2016 season. RoRo tallied six goals and six assists from 42 appearances across all competitions with the Mexican club. The midfielder spent the 2017 season on loan with Deportivo Toluca where he registered a dozen appearances for the top-flight Liga MX side and recorded one assist.

RoRo returned to Celaya FC for the 2018 season where he made 29 appearances across all competitions, scoring once against Santos Laguna during Copa MX Apertura action. Prior to the 2019 season, Lopez joined Club Deportivo Veracruz of Liga MX, where he has since made 13 appearances, nine of which were starts.

The 32-year-old began his playing career in Chivas de Guadalajara’s youth system before signing his first professional contract with Chivas USA in 2005, making eight MLS appearances for the Southern Californian club. In 2008, Lopez joined the Ventura County Fusion before playing for Cuervos Negros de Zapotlanejo and Queretaro in Mexico but returned for a second stint with the Fusion in 2009, where the midfielder helped to guide Ventura County to the 2009 PDL Championship.

RoRo joined Portland Timbers in 2009 and signed an MLS contract with the club in 2011 before returning to Ventura County in 2012. Lopez spent the remainder of 2012 with Orlando City SC and 2013 with the Los Angeles Blues before Republic FC signed the experienced playmaker on December 2, 2013.