TACOMA, Washington (August 5, 2021) – The first of four meetings with the Tacoma Defiance ended in a 1-1 draw on Thursday evening at Cheney Stadium, as Jerome Kiesewetter opened his Sacramento Republic FC scoring account.

Thursday’s matchup with Tacoma took a defensive tone from the opening whistle, starting out with short, conservative passing in each team’s defensive third – the majority of Sacramento’s early offensive production was down the right sideline on the boots of Jordan McCrary and Kharlton Belmar. Aside from the occasional passing into a tight space from a continually developing Mario Penagos, the Indomitable Club felt the full force of Tacoma’s back line early. 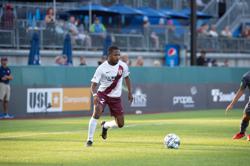 Republic FC broke the deadlock and struck early again. A failed clearance combined with offensive persistence allowed Jerome Kiesewetter to open his account for the boys in Old Glory Red on a close-range header. Kiesewetter’s score came on an assist from Duke Lacroix, marking Lacroix’s second straight game with an assist and third assist this year.

With a lead in hand near the halftime whistle, Republic FC began to utilize the width of the pitch. Dan Casey led the squad in the first half with 39 completed passes, 15 of which went to Hayden Sargis that opened the left side of the field for Mark Briggs’ offense. Briggs’ men primarily favored the right sideline still, with Casey (51) and McCrary (44) picking up 95 combined first-half touches to lead Sacramento.

In addition to his passing, Casey was key in Republic FC’s defensive effort in the opening 45 minutes. The defender recorded an interception and a team-high four clearances in the first half before ending the night with seven clearances to lead all players.

Republic FC continued utilizing the left side of the pitch in the second half after Cam Iwasa entered for Kiesewetter in the 51st minute. Lacroix ran into wide open space down the left side in the 74th minute and was able to play a ball all the way across the box, but the finish didn’t find the back of the net.

Tacoma turned up the heat offensively in the second half, logging three shots through the first 25 minutes after recording three for the whole first half. Tactically, the Indomitable Club countered with Mitch Taintor’s entry in the 76th minute to relieve Penagos on the back line. Randy Mendoza entered for Tacoma in the 81st minute, and the substitution paid off as Mendoza leveled the match a minute later.

The Indomitable Club returns to action on Wednesday, August 11 in a rescheduled match at Oakland Roots SC before returning to Heart Health Park on August 14 against Las Vegas Lights FC. Wednesday’s matchup will be broadcast locally on KQCA My58 and Estrella TV Sacramento, as well as streaming on ESPN+.